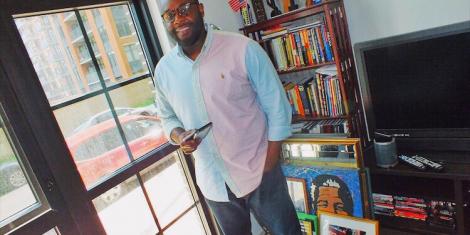 According to kenyans.co.ke, Joe Biden has handpicked a Kenyan – Kamau Mandela Marshall, a communications expert to spearhead his campaign. Kamau’s Bio indicates that he was born in Chicago but does not show his Kenyan connection. Here is the story.

2020 candidate for President of the United States, Joe Biden, handpicked a Kenyan communications expert to spearhead his campaign as he looks to occupy the White House in next year’s general election.

Kamau Mandela Marshall was chosen as the Director of Strategic Communications at Biden’s camp, a key role in any presidential candidate’s campaign.

Mr Kamau had been serving as Texas congressman, Al Green’s Communications Director between 2017 and 2018 as well as a speechwriter and communications advisor under the Obama Administration back in 2016.

His illustrious career has also seen him serve as a special assistant in the office of Elija Cummings– U.S. Representative from Maryland’s 7th District, as well as a press and legislative fellow at the office of Senator Tom Carper back in 2013.

The astute communications expert based in Washington D.C. Metro Area, could potentially find himself as the White House Communications Director, a position normally reserved for a senior public relations staff member of the candidate’s campaign staff.

This is more often than not either the deputy campaign manager or the campaign communications director.

Joe Biden, who served for eight years as Barack Obama’s deputy after more than three decades in the U.S. Senate, launched his third shot at the presidency on April 25, 2019.

Interestingly, despite joining the presidential fray quite late, the former vice president has surged ahead of his competitors in the Democratic primary voter’s polls.

“Everything that has made America is at stake. That’s why today I’m announcing my candidacy for president of the United States,” the 76-year-old Biden stated as he made his announcement through a video.

His announcement caused ripples across the US political landscape with incumbent President, Donald Trump, sarcastically welcoming him to the 2020 presidential race through a tweet.

“Welcome to the race Sleepy Joe, it will be nasty. I only hope you have the intelligence, long in doubt, to wage a successful primary campaign,” Trump tweeted.

WOW:Now Raila claims that Military rigged Uhuru and Ruto in

VERY INTERESTING:HOW TO BARGAIN WITH A KENYAN THIEF

VIDEO: Salary Breakdown while working in the US Part 1