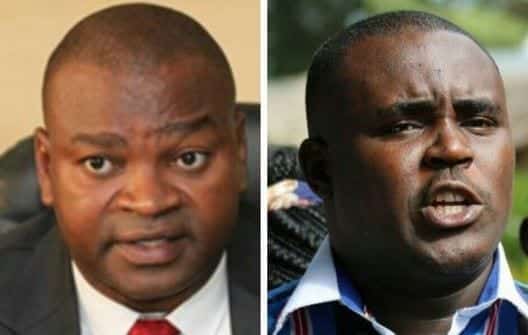 Kakamega Senator Cleophas Malala and former Sports CS Rashid Echesa have been arrested in the wake of recent killings by a criminal gang which has left 18 people dead in the past month.

The two are currently being questioned over claims that they are linked to activities of the gang in Matungu.Police intercepted Mr Echesa while he was on his way to attend to another meeting in Likuyani where Deputy President William Ruto was going to commission the construction of a road.The arrests come a day after Interior Cabinet Secretary Fred Matiang’i toured Matungu in Kakamega County and issued new tough measures on security.

Making the announcement Thursday, Matiang’i said a contingent of General Service Unit (GSU) officers will be deployed to beef up security and boost the regular police numbers.The CS said police are still following what he termed ‘crucial leads’ linking local politicians and that in few days to come, the politicians will be arrested to record statements in relation to the bizarre killings.

He said some politicians had formed vigilantes for their selfish interests that led to the killings, as the groupings try to outshine each other, even as he extended an olive branch for the gang members to surrender before they are flashed out by police.”We will go to the direction the investigations will take.

We don’t care who you are under the political class and your status in society. We will arrest and deal with you as per the law,” he warned.Six key suspects were arrested on Wednesday night among them a jailbird believed to be coordinating the attacks from Nairobi. He was fished out from his hideout in the city.Dr Matiang’i, accompanied by Inspector General of Police Hillary Mutyambai toured Kakamega and Vihiga counties to assess the security situation.