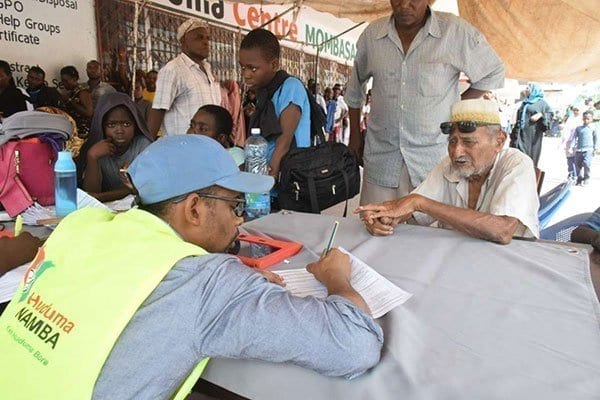 The Huduma Namba will serve as the official sufficient proof for identification in the country and its registration will now be mandatory for access to government services if the draft Huduma Bill 2019 is enacted by the National Assembly and signed into law by the President.

The Huduma card shall serve as the official government-issued document for identification and conduct of transactions.

This means that you will be required to have Huduma Namba to register as a voter, access universal healthcare, passport, apply for a driving licence, register a mobile phone number, pay taxes, transact in the financial markets and open a bank account.

Currently, the national Identity Card serves as the official identification mode upon which all these services are predicated. The proposal by Interior Cabinet Secretary Fred Matiang’i will, however, require the approval of the Cabinet before being tabled in Parliament.

The registration of Huduma Namba shall be through the National Integrated Identity Management System (NIIMS) that will be a primary database for both foundational and functional data, from which every other database with personal data of residents in Kenya will be built. The databases include those of voters, taxes, and social services.

Supremacy Battle: Uhuru and Ruto fight for control of…

According to Dr Matiang’i, the passage of the bill will create an efficient identity system that will present opportunities for fiscal savings, development of the digital economy and enhanced public and private sector service delivery.

Dr Matiang’i proposes “An Act of Parliament to establish the National Integrated Identity Management System to promote efficient delivery of public services, to consolidate and harmonise the law on registration of persons, to facilitate assigning of Huduma Namba and issuance of identity documents, (and) to facilitate registration of births and deaths.”

Huduma Namba is a unique and permanent personal identification number assigned to every resident individual at birth or upon enrolment under the Act. It, however, says that no government agency shall collect foundational data from an individual who has enrolled under this Act.

The registration of a company or a public benefit organisation, transfer or any dealings in land, electricity connection, access to the government housing scheme, marriage, public education, social protection services, register or a motor vehicle transfer or any other specified public service will also require the card.

Tampering with the card will attract a three-year jail term or Sh3 million fine or both. “A person who carries out or permits the carrying out of any transaction specified in section 8 without a Huduma Namba commits an offence,” the proposed law says.

A Huduma card shall include information on a person’s full name, sex, date of birth, registration number, nationality or residence status, place of birth, front facing photograph and the date of issue.

According to the draft bill, one of the observed shortcomings on Kenya’s identity ecosystem is the fact that the two identity modes, the foundational and functional, have little interoperability.

The national Identity Card, despite having all the personal data details, including biometrics, has very little utility in functional areas.