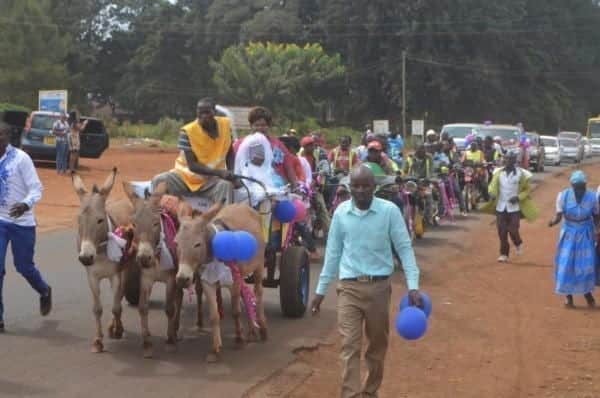 When Boniface Kiarie and his bride Mary Wawira stepped out last Saturday for their wedding, the couple showed that creativity is more than being different.

Well anybody can be weird; that’s easy. But for them, they made the simple look so awesomely simple that their ingenuity stood out saliently in the sleepy Kutus town.

In place of the usual glitzy rides that we are used to see ferry the bridal party, the couple went for oxen and donkey carts.The convoy from Ndomba village to Kutus town was escorted by boda boda riders who lined the three kilometre stretch. Eager residents craned their necks to catch a glimpse of the boldly unique spectacle.

The bull that was at the front pulling the oxcart which carried the groom was fitted with “shoes”. It slowly tagged along in its gleaming footwear, much to the amusement of many.The carts were decorated with flashy colours befitting the grand event. Kiarie, who is the manager of Leisure Hotels in Kutus, said he chose to use the carts in order to cut on costs, given the hard economic times.

Both carts cost Sh3,000. “I also wanted to show those who splash millions on lavish weddings only to start regretting after the guests have left that a simple one is still good enough.That is just as long as it accomplishes one’s wishes and aspirations,” said Kiarie, as he rode on the oxcart.

The couple’s convoy caused a stir as it joined the main Kutus-Kagio road while heading towards the local Full Gospel Church, where the marriage was solemnised.

Groomsmen who were dressed in navy blue suits and pink shirts walked on either sides of the carts, unaware of the attention the spectacle was drawing.A reception was later held at the same church grounds, where guests indulged in sumptious dishes, while toasting to the newlyweds.