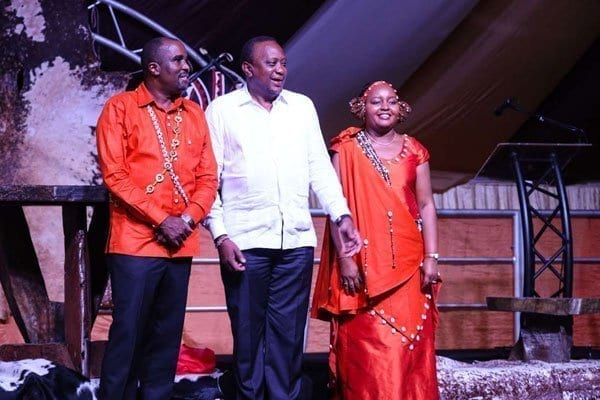 When President Uhuru Kenyatta visited Gichugu Constituency in Kirinyaga County on September 6, 2014, to attend the homecoming party of the then Devolution Cabinet Secretary Anne Mumbi Waiguru, he pledged to have one of the major roads which passes through the rich agricultural area tarmacked.

That pledge has returned to haunt him about five years down the line, as the Sh1.5 billion  Kianyaga-Githure-Kibugu road is still in a deplorable state.

While attending the traditional wedding of Ms Waiguru, now the Kirinyaga governor, the President noted on Saturday that the road is yet to be revamped.

“I promised that this very road would be tarmacked but it has not been done. People of Kirinyaga, I know a promise is a debt. I owe you a debt and it must be paid,” he said at Kiamugumo Primary School where the ceremony took place.

President Kenyatta explained how the tender was awarded to a contractor who failed to do the job and he was chased away.“We cancelled the contract because he was incompetent. We have now given the job to another contractor of international standards and I have instructed him to ensure the project is completed in one year,” he said to loud applause.

He added that the road will be constructed properly so residents have an easy time with their dairy, coffee and tea farming activities.

During the home coming celebration, it was Ms Waiguru who informed the President that the road was impassable and urged him to intervene.

She told Mr Kenyatta that for more than 50 years, residents of the remote Kiamugumo village, where she was born and raised, had never had a presidential visit.

“Your Excellency, it is true we have not hosted a head of State for the last 50 years. That is why our village has no single tarmacked road. The village is landlocked and it is usually difficult for farmers to deliver their tea, coffee and other agricultural produce to the market for sale,” she said then.She noted that the people were hardworking but had a difficult time going about their business activities.

The last time the village, whose challenges are not limited to poor road networks, hosted a sitting President was in 1964 when Kenya became a republic.

Former Presidents Mwai Kibaki, who always enjoyed the residents’ overwhelming support during elections. and Daniel arap Moi, who led the country for 24 years, both retired without touring the village which has produced top government officials and shrewd politicians.

The lack of presidential visits explains why hundreds of Kiamugumo residents were excited when President Kenyatta arrived on Saturday, attended Ms Waiguru and city lawyer Kamotho Waiganjo’s wedding and addressed them.

They turned up in large numbers to welcome and catch a glimpse of the most powerful man in Kenya, majority saying they had never seen a sitting President since they were born.

Some were overheard shouting that their prayers had been heard and thanking the governor for holding occasions big enough for the President to attend.

The residents observed that although the area has a very good climate and rich agricultural soils, it is the least developed in Gichugu when it terms to roads. Rains render the roads impassable due to mud.

At the time of Ms Waiguru’s homecoming ceremony, a large convoy of cars that leaders travelled in to meet the President got stuck in mud and had to be pushed out by residents.

In her address, Ms Waiguru told the President that nobody in his position had ever visited the village for an understanding of how the people lived.

She said the area had escaped the attention of various Kenyan Presidents, thereby remaining undeveloped.

Ms Waiguru said at that time that she was happy to see the President around as that meant their problems would be solved.

In response, President Kenyatta admitted that the roads were in a bad state and promised that they would be improved.

But when he returned on Saturday, the roads leading to the school were dusty.

Kiamugumo residents, who largely voted for Mr Kenyatta in the 2013 and 2017 general elections, will be waiting to see whether he will fulfill his promise.