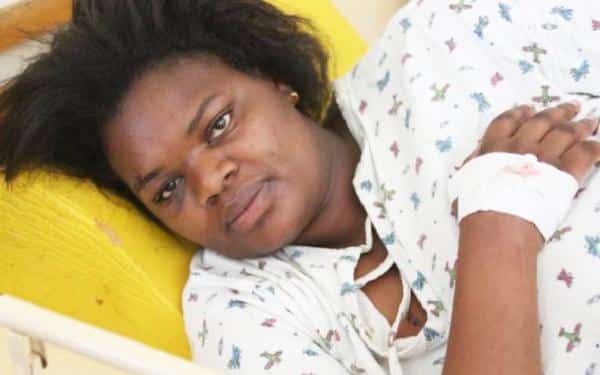 Nyeri Woman stabbed 17 times by husband wants him freed: A Nyeri woman who survived 17 stab wounds during an alleged marital squabble with her husband has withdrawn the charges charges against her husband in a Karatina Court.

Peninah Wangechi has been married to Samuel Ndirangu for seven years.She requested Principal Magistrate Alice Mwangi to have charges against Ndirangu withdrawn.

The mother of three was hospitalised in April.She said while she and her husband had separated since the incident, she has forgiven him.“I am not being forced by anyone to drop this case. I just want to let this matter go.

“Wangechi was asked if she had been threatened or compelled to withdraw the case, she insisted that she wanted the charges dropped out of her own free will.

Magistrate Mwangi granted the request and set Ndirangu free.During an interview with The Standard in April, Wangechi narrated how she had endured abuse from her husband.She was admitted at Karatina Sub County Hospital.

The mother of three said the marriage had been unstable.“He has always threatened to kill me but I never took it seriously since that was the way he spoke to me,” Wangechi said.She said on that fateful night her husband and a family friend had called them for a meeting seeking counsel on their marital problems.

However the quarrelling had continued till at around midnight when they engaged in a quarrel over money.“I never took the threats seriously before, but this time he took my phone and switched it off. He then took a knife and started stabbing me.

“He fled the scene and surrendered himself at Karatina Police Station where he claimed he had killed his wife.But unbeknown to him, neighbours had taken Wangechi to the hospital and saved her life.