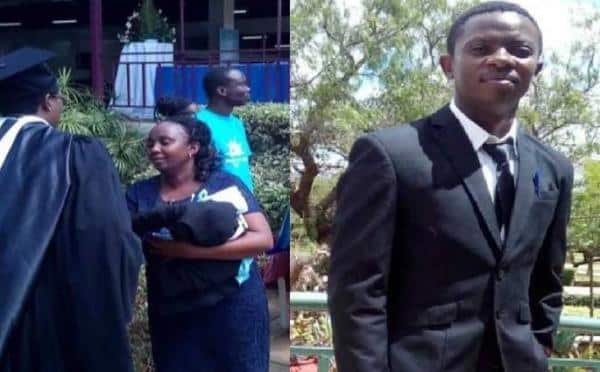 It was an emotional moment at Daystar University when the mother of a deceased graduate attended the ceremony to receive a degree on behalf of her son who was to graduate on that day.

Derrick Macharia Githinji’s mother had prepared for her son’s graduation, only for him to die four days to the graduation day.

The mother was given a standing ovation as Daystar University Vice-Chancellor Prof Laban Ayiro conferred her with the son’s degree.

Many were seen clapping at the graduation ground in Athi River while others could not control their tears.

Nevertheless, for Githinji’s mother, her son had fought a good fight, kept the faith, and eventually won the prize.

In her words, she said precious people with remarkable achievement deserve to be celebrated, whether alive or dead.

“Dear graduands, as you go to the world, shine and aspire to live a worthwhile legacy, because your achievements aren’t only celebrated in your lifetime but even after,” said the mother.

Githinji died Monday, June 24, after he was hit by a speeding motorbike at Ruiru Naivas, along Thika Super Highway, about 200 meters from his home.

Video: Are Kenyans really Damned? The harrowing tales of floods of terror

DEVOTION:How Does Hope Inspire You?

Joy and jubilation in IDP camps as state allocates sh3.3 billion for ressetlement