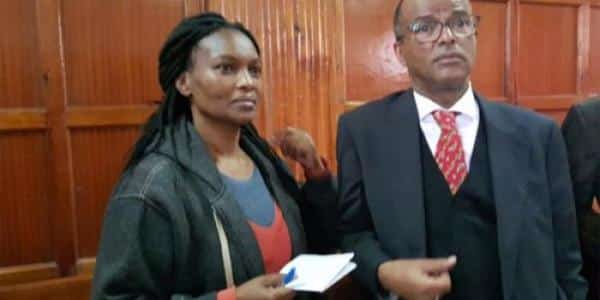 Sarah Wairimu asks Chiromo not to release Cohen’s body to the sister: Ms Sarah Wairimu, Dutch tycoon Tob Cohen’s widow, says she will not allow anyone else to bury him.

Ms Wairimu was locked up at Lang’ata Women’s Prison in Nairobi on the accusation of murdering her estranged husband.

On Wednesday, she wrote to Chiromo Mortuary in Nairobi asking its management not to release Mr Cohen’s body to his sister Gabrielle.

Gabriele, according to Ms Wairimu, is “in a hurry to quickly” intern the remains at an undisclosed location and leave Kenya.

Ms Cohen’s sister is said to have requested the speedy conclusion of the postmortem to enable her bury her brother and return home.

In the letter by her lawyer Philip Murgor, Ms Wairimu also noted that she “remains the lawfully married wife despite the trumped-up murder charges she is facing”.

She said she is the only one with the rights to bury Mr Cohen, whose body is currently undergoing a postmortem examination.

“Needless to say she remains innocent until proven guilty,” she said and attached her marriage certificate.

He also said, “Our client is fully aware of the wishes of her late husband, none of which includes him buried at the shortest time possible. We therefore demand that the burial permit be issued to no one else but herself or ourselves on her behalf.”

The Dutchman went missing between July and July 20 and his body was found in a water tank in his compound in Kitisuru, Nairobi, last Fidayy, 55 days later.

At the time, the 71-year-old tours and travel expert had been pursuing a divorce case against Ms Wairimu. He had also filed an assault case against her.

Ms Wairimu was arrested as the key suspect behind his murder.

Initially, Mr Cohen’s workers had told police that he left his high-security compound, where CCTV cameras point to the drive-way, on the afternoon of July 20 at around 2pm. They claimed that he only carried a briefcase and was driven off in a white car.
At first, his wife – well known in Nairobi socialite circles – had told Mr Cohen’s friends that the established golf tournament organiser had left for Thailand to seek treatment but detectives say that there is no evidence from immigration department that the missing tycoon had left the country.