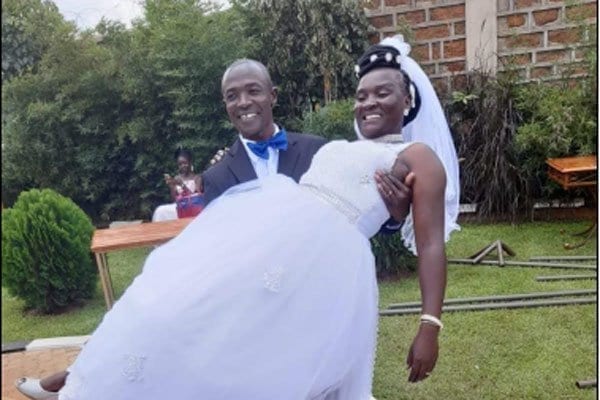 Very Sad: Waited 21 years to get married,died 19 days after wedding: When Doris Wako said “Yes, I do” to the love of her life Bernard Levy Mwato on August 17, she knew that her best moment in life had just arrived.

She cherished Mwato and he adored her. It had taken them 21 years of dating — since their high school days — and they were ready and excited about their marriage.

“Till death do us apart,” they vowed on their colourful wedding day at Our Lady of Grace and Compassion Primary School in Mundika, Busia County, two weeks ago.

Unknown to them death was lurking around the corner.

They were married for only 19 days when death suddenly ended their happily-ever-after dream.

Ms Wako, an Administration Police officer based in Busia Town is mourning the untimely death of her 40-year-old husband.

On Wednesday, Mr Mwato had visited his uncle’s home in Funyula to collect a wedding gift.

He collapsed and was rushed to Busia County Referral Hospital where he was found to be dead.

Doris Wako and her husband Levy Mwato dance during their wedding on August 17, 2019. PHOTO | COURTESY

The news was devastating to his 38-year-old newly-wed wife.

“Rest in peace my love, till we meet again,” Ms Wako posted on her Facebook page alongside one of their wedding photos.

The post was a great shock to friends and family who had attended their wedding. Friends expressed shock and grief on her timeline after learning of her loss.

Doris Wako with street children during her wedding at Our Lady of Grace and Compassion Primary School in Mundika, Matayos, Busia County, on August 17, 2019. PHOTO | FILE | NATION MEDIA GROUP

“That’s too soon Levy. May the good God comfort and be with you in this trying moment. Take heart and courage, its everyone’s way,” said Fredrick Magero.

Walter Langat posted; “My heartfelt condolences to you and the entire family. God is the same yesterday, today and forever. Be encouraged. Shalom.”

What set the wedding apart was that the bride had invited street children to attend and feast with other quests.

She had a soft spot for street children and was once posted on social media sharing a meal with them in Busia town.

She was also among 21 women honoured in March this year, during the International Women’s Day celebrations graced by Ms Ida Odinga and Busia Governor Sospeter Ojaamong, for their role in helping the less privileged in society.

A post-mortem is being conducted to determine the cause of the death, although a heart attack is suspected.