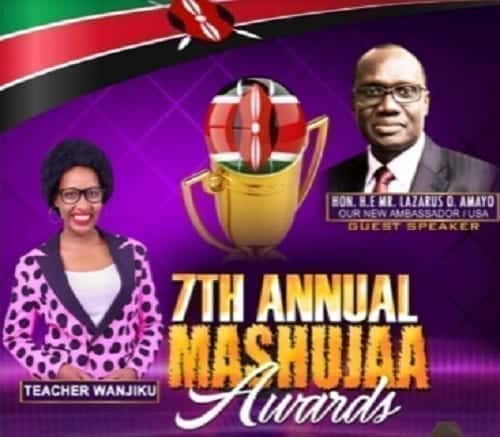 Some Kenyans who attended Mashujaa Day show in Houston Texas were unhappy with the entrance fee charged in order to access consular services. Diaspora Messenger reached out to Dr. Dan Mugubi,the Mashujaa day chairman for reaction and he sent the below statement at the bottom of the page.

There was outrage in Houston, Texas as Kenyans gathered in the city to commemorate Mashujaa day during the 7 th annual Mashujaa awards show. According to our sources, unconfirmed reports indicate that Mashujaa awards organizers may have conspired to defraud unsuspecting Kenyans Ksh.5, 000 shillings (USD 50) as entrance fee in order to access consular services.

As per Mashujaa awards officials, the money was cover charges for the Hall rental used by the
embassy staff. Additionally, they argue that the embassy came to Houston, courtesy of Mashujaa
awards, hence, they were justified to charge 50 dollars and save Kenyans a trip to Washington,
DC which would have otherwise cost more than hundreds of dollars including accommodation.
However, Kenyans outrage sparks from the fact that there was no prior communication
indicating that consular services would cost a fee. Information on the flier backs sentiments
expressed by majority of Kenyans who had to part way with 50 dollars, that indeed there was no
information on the flier or otherwise indicating that Kenyans will have to be charged at the door
for consular service.

Quite saddening is the fact that many of those affected had travelled as far as Dallas and Midland
Texas, a journey of 4 to 7 hours for consular services. The heartless nature of Mashujaa
organizers came alive this Saturday and their true nature revealed. Their actions were uncalled
for and it’s a contradiction to the Mashujaa spirit.
With plenty of Kenyan Churches in Houston, the Kenyan embassy could not lack space to offer
free services if rental space was the reason for the 50 dollars charge, not unless there was
collusion between Mashujaa organizers to charge a fee and defraud kenyans. If that’s not the
case, why didn’t they charge a fee for Sundays consular services after kenyans outrage?
The idea that the leadership of the Kenyan community in Houston can take advantage of a need
of an ordinary Kenyan for their selfish end is shameful to say the least. Many have expressed
outrage in silence for retaliation.
Even more disturbing was the arrogance and condescending attitude of one of the Mashujaa
awards official, Earnest Mbalanya, who is believed to be right hand man of the Mashujaa awards
Chairman. and Dr. Dan Mugubi. During a response to a post in a kenyans in Houston Facebook
group, posted by Lauryn Kagwi, an influential opinion shaper in Houston, Mr. Mbalanya

unashamedly dismissed her complains and went further to compare her to a graduate of Trump
university. 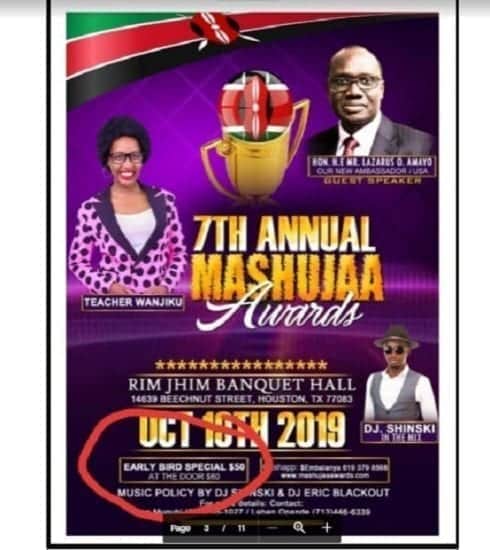 What could have been a simple apology to a misunderstanding escalated into a bitter and childish
response from Mr. Mbalanya as can be seen in his posts above?

What many Kenyans are wondering is? While it’s true that paying 50 dollars is cheaper than
going to Washington DC, why didn’t Mashujaa awards organizers indicate on the flier that they
would impose a 50-dollar charge for consular services as a cost to cover the rental hall? Perhaps
the Kenyan Embassy in DC should explain why they can’t partner with one of the local Kenyan
churches to offer their services for free? Was there collusion between Mashujaa organizers to
impose the fee and share the loot with some of the embassy staff?

According to Kenyans in Houston, poor organization and strategy have seen the annual events
attendance dwindle. To boost their margins, organizers capitalize on renting dilapidated
buildings and overcharging the entrance fee. According to our sources, Congresswoman Sheila
Jackson Lee chided the organizers on the location of the event.

More Houstonians registered their complains of what has become a FAKE awards show that
doesn’t represent community heroes as marketed, but rather handpicked individuals who play to the whims of the organizers. Gone are the days when winners were revealed based on the voting results, rather, voting is a mere formality that doesn’t determine winners in any categories.

For instance, last years, the event was marketed as if 7 senators from Kenya would attend, yet no single senator or representative attended. During this year’s Mashujaa, the ambassador’s face was marketed as the guest speaker, neither was he present nor did any of his representative
address the gathering. For many Kenyans who attended, they didn’t see a 50-dollar act that was
appealing enough to convince them attend the next event. Save for the desire to meet other
Kenyans whom they haven’t seen in a long time.

Besides the negative reviews and a bitter exchange from one of the organizers, Mashujaa awards was successful with a sold-out event. If organizers plan to be successful in future, they need to learn how to respond to criticism and apologize for mistakes. Arrogance and condescending attitude will not win them any more people to dupe into their dirty schemes. The Ethics and Anti- corruption Commission should be alerted on the behaviors of the embassy staff in provision of services in the diaspora. No Kenyan should be taken advantage in the pretense of saving them a trip to DC. Shame on the Kenyan embassy.

Kenyans should stand up for truth, transparency and justice and stop allowing to be taken
advantage of. This is unacceptable regardless of who is doing it and how justified they try to
make their case. Wrong is wrong and right is right. Majority of people who spoke on condition
of anonymity agree that Mashujaa awards officials who also double up as leaders of the Kenya
community in Houston are using their platform to further their selfish interests.

The story was a collaboration of whistle blowers who didn’t want their identity revealed for fear
of retaliation. Screenshots were provided from a Facebook group by the name the Kenyans in
Houston.

The writer can be reached at [email protected]

Mashujaa Awards ceremony is an annual event, in its 7th year now, hosted in the U.S.A to
remember, acknowledge, appreciate, and honor all persons (individuals or entities) who
contributed towards the struggle for Kenya’s independence, those who continue to
positively contribute in post independence Kenya, as well as those who continue to make
extraordinary sacrifices which positively impact the families and communities in which they
live in.
To host a successful Mashujaa Awards ceremony, the organizers understandably employ
many man-hours and invest great financial resources. Generally, those resources go to
cover expenses for items like a banquet hall, catering of food, paying of vendors, securing
entertainers, etc. To defray these costs, the organizers usually charge a fee on those who
wish to participate in the event. Many times, the organizers also invite individuals and
entities from both the private sector, government, and even from the church, to
provide/share information and/or services to those attending the ceremony. In order to
reach the larger community, the organizers create flyers which are easily shareable on
social media platforms. Every attempt is made to provide critical pertinent information, for
example the date, venue, key guests invited or attending, the fee to attend, and contacts
of persons who may be contacted for more information.
The Mashujaa Awards organizers routinely invite Kenya’s ambassador to the US to grace
the ceremony. While the ambassador has not been able to attend in any of the past
Mashujaa Awards events, the embassy however has always been gracious in
acknowledging the invitations, sometimes sending a representative, and sometimes simply
sending a message of goodwill. The Organizers of this year’s event not only invited the
embassy to grace the celebration, but also requested consular services for those attending.
The embassy obliged, confirming that the ambassador shall be attending this year’s event
and that they shall provide attendees with consular services. The organizers then sought
the embassy to advise on what services shall be available, to which a flyer was created
outlining the same. The flyer further directed those interested to visit the embassy website
for details on fees, information, and documentation that would be required for any
application. That messaging flyer was shared with the public jointly with the Mashujaa
Awards ceremony event flyer.
The organizers have become aware of inaccurate information which is being shared
in the public domain, and especially in social media platforms, that the embassy was
charging an entry fee to the event before serving those who sought consular

services. It is hereby affirmed that such assertions are patently false! The accurate
position is that the organizers had a full program of Mashujaa Awards ceremony.
There were numerous participants, who included vendors, entertainers, guest
speakers, as well as service providers. The embassy was one of the service providers
who were being hosted by Mashujaa Awards. In order to access any of those
participants, one needed to purchase a ticket for the event. As such, those who
sought consular services, like all other guests, had to purchase a ticket in order to be
admitted.
Further, the organizers wish to confirm that all costs for travel and accommodation for all
embassy personnel, who dutifully, diligently, and professionally served attendees at
Mashujaa Awards, were borne by the Kenya Embassy in DC. Any message to the contrary
is inaccurate and misleading.
Since its inauguration over 7 years ago, Mashujaa Awards board members, many of whom
are community leaders in and around the Houston area, have continued to endeavor in
creating a vibrant, resourceful, informed and united community. They are all respected
professionals in their various fields and careers. Indeed, they have actively participated in
one way or another, in virtually every community event in the Houston area and beyond,
in social-economic empowerment, benevolence, and charity work. While it is
acknowledged that everyone has room for improvement in whatever endeavor
undertaken, it must be known that we all must remain objective, courteous, and respectful
as we articulate any challenges that befall us. Equally, we must recognize and appreciate
the efforts and lengths some of the community members go, to assist a fellow community
member. Indeed, as a result of the embassy’s invitation to grace and provide consular
services during the Mashujaa Awards ceremony, over 200 Kenyans received those services.
The very successful exercise saved many attendees money and time, were they to seek an
alternative solution. Indeed, it is our hope that the collaboration shall be a feature in all
future Mashujaa Awards ceremonies, as we continue to strive in assisting the community
wherever and whenever possible.
On behalf of the board and organizers of Mashujaa Awards ceremony, I wish to
extend my sincere congratulatory message to all nominees and honorees of this
year’s event. I also wish to sincerely thank our sponsors, the entertainers, the
caterers, KDREMS, staff at the Kenya Embassy in DC, HE Amb. Lazarus Amayo, HE
Deputy Amb. Gacheru, Congresswoman Sheila Jackson Lee (D-18th District-Texas),
and all people of goodwill.

Did You Know the Founder of Europe’s Biggest Awards is Kenyan?