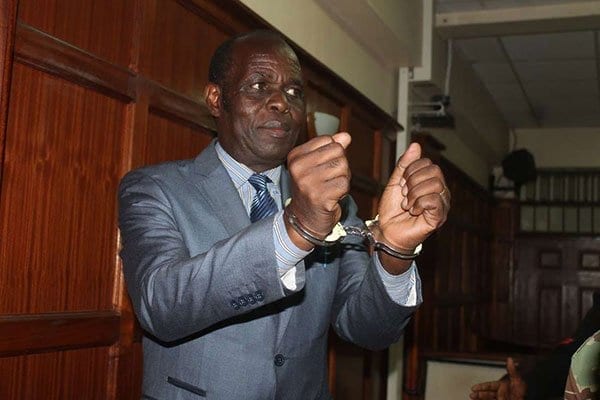 Pastor Gilbert Deya is back in town. It has been 15 years since the pastor’s “miracle babies” scandal came to light.

The mason-turned-pastor then left for the United Kingdom where, in 2017, he failed in his decade-long battle to remain there.

The archbishop denied stealing five children between 1999 and 2004.

The prosecution accused him of manipulating barren women, exposing a child trafficking scheme that shocked the nation.

The matter has been investigated by authorities in the UK and Kenya.

Upon his return, the self-styled archbishop was detained for nine months at Kamiti Maximum Security Prison. He was freed on a Sh10 million bond in May last year.

Since his release, the archbishop has received significant media coverage.

He even opened up about his relationship with women. In a June 2019 interview with Radio Jambo, he said: “I decided to get another woman. It is important to get a woman and avoid the lust of the flesh. In Kenya, women are like nuts. They are so many that the government has said even having 50 of them is ok.”

On a visit to his church, the Nation team was informed that services have been temporarily suspended, “as we are gearing up our minds for the December 14 homecoming rally”.

According to the archbishop, the crusade “will be a big thing since the government has granted us land for the event”.

The venue is Quarry grounds in Pipeline estate. The “mega crusade” ends on December 22.

“It will be a big party. There will be 21 goats, 21 chickens and lots of food for everyone,” he said.

Deya added that four horses would be in his convoy along Jogoo Road.

He also alluded to having the support of the government since his release from prison, adding that notable guests are expected at the rally.

The crusade was to be aired on Deya’s television network DBN, “and it can be viewed on all free-to-air TV sets”.

The homecoming crusade was to begin at 10 am. When the Nation team arrived at 10.30 am, only ushers and a few locals were present.

The tables were draped in white and gold embroidered cloth, with flowers and pebbles in vases.

However, the stench of raw sewage and garbage from the surroundings filled the air. The celebration arena appeared to be a diamond in the rough.

The master of ceremonies would periodically inform us of the imminent arrival of the “huge” convoy, as it was stuck in traffic on Outer Ring Road.

He added that the archbishop would arrive with the police band in tow.

At 12.32 pm, honking motorbikes rode into the arena. Following them was a blue saloon car and a Sports Utility Vehicle with men running beside it, keeping up with its speed. Deya had arrived.

He was in a navy blue suit. As he approached his table, he was flanked by family members and pastors.

After a session of singing, the invited pastors introduced themselves to the crowd, singing their leader’s praises and referring to him as “father”.

One recalled the archbishop preaching at Shan Cinema, Ngara, in 1991. He said he was ”a nobody” but was transformed by the prayers.

Apostle Amos Deya, the archbishop’s son, was around. He resides in London and came to the rally “out of respect for my father”.

He introduced Mr Aketch, who praised Deya for his “kindness and humility”. “I never thought I was going to be in politics, because I lived in Ziwani,” Mr Aketch said.

He also showered Nairobi Governor Mike Sonko with praises, urging the congregation to pray for him “at this time of need”.

Another pastor, a Dr Karanja, mentioned the ”miracle babies” scandal. He condemned the government “for persecuting the anointed man of God who performs miracles that are beyond human comprehension”.

He gave the story of a woman called Cassandra “who had full-blown Aids, but got healed when the archbishop prayed for her”.

Deya walked to the stage at 3.33pm. “I feel emotional and happy to be in Kenya,” he said.

He said he was approached by Pastor James Ng’ang’a of Neno Evangelism who gave him the idea of a homecoming party.

He then spoke of the purpose of his return: to perform miracles.

“I’m here to heal your sicknesses and kill those who bewitch you,” he said. “My Jesus kills witches.”

The congregation roared as he promised to take away their poverty and ailments.

Deya told his sons to “leave the miracles to me and minister the word of God during the week-long crusade”.

The sermon was characterised by Bible verses, indicating the preacher’s full return to the pulpit.