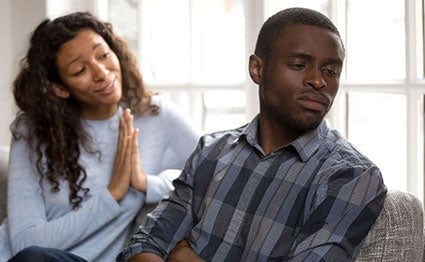 I’m a 40-year-old married man with two children. When my wife and I were dating, I suspected she was unfaithful to me but I never found proof. But when we got married, I found proof in some lurid messages she was exchanging with a man. I discovered this because she sent a reply to me instead of him. Guilt drove her into hiding the phone and deleting the chats, but the truth was already out. She first denied all the allegations until I showed her what she had sent me. She then owned up and apologised but I did not feel like she was being genuine. We are both Christians but I feel like I’m living with a fake wife. I feel cheated since I have invested a lot in this marriage. I feel like she will never change.

Your values and hers have not been aligned from the day you met, according to your story.

You were suspicious about her character from the time you were dating until you got married and proved that you were right all along.

Her manners are, however, inexcusable. In some relationships, people justify their actions by arguing that the other person was the one “chasing after them”.

Others would even have the guts to say that they were just flirting and did not mean to do any harm.

It could be true that some flirt because they are trying to seek for affirmation that they might not be getting in the marriage.

However, this cannot be an excuse for embracing wrong values that could lead to bad behaviour.

Since your marriage struggles with values such as trust, honesty and faithfulness, you may need to identify the root cause of the defiance noted in your spouse.

Why would she exchange such dirty messages and choose to lie about it? The end result is to reclaim the values your family should subscribe to.

This is the only way you can support the growth of a healthy interaction in your marriage.

It is one thing to identify values to live by, and it is totally something else to subscribe, adopt and submit oneself to such values.

As far as your relationship is concerned, your wife has chosen a path that only reason, resolve, prayer and grace can lead her out of.

There is a lie lived by many out there that flirting feels good. But what we fail to realise is that the pain and the destruction that follows may be irreparable.

Flirting is about a person’s sexual gratification. Maybe in one way, this could teach us ways we can protect our spouse by seeking to be the answer to their searching.

For example, in your discussion with your wife, try and find out what draws her to such actions.

Many spouses ignore their spouse’s feeling and emotional needs leaving them to be lured by their fleshly desires.

I know you might argue about their lack of self-discipline and self-control. However, accountability in relationships calls for personal accountability.

Therefore, we are not exempt or removed from fulfilling our obligations.

If the root cause of your wife’s behaviour stems from her upbringing or her past exposure and associations, then she has to make a determined effort to disconnect from such practice.

You may need to seek disclosure from her on how deep this problem may be. Is it a struggle she finds hard to disconnect from?

Marriage is about “forsaking all others” and committing oneself to their spouse.

At times, breaking oneself free from such habits and friends that would negatively work against the marriage relationship requires determination, discipline and self-control.

The way the two of you handle this issue will be key to her breaking free from this stranglehold.

To bring a lasting solution to any conflict, management of such conflict not only requires identification of the core issues surrounding the problem, but also putting in place any goals that may need to be embraced and observed if new practices have to be cultivated.

This is what gives birth to responsible behaviour. Since your wife’s biggest issue is to delink from this practice and also from those who influenced her negatively, I suggest that you identify a Christian counsellor to give you support and help your wife gain the confidence to delink from this past.

Before I conclude, I feel obliged to share some practical ways of cultivating a thriving marriage in the midst of the modern challenges we face.

First, we must not let our past pain and exposure define who we become — particularly if that definition is in the negative.

The resolve and determination that we embrace becomes key in confronting any part of that past that would work negatively for us.

The way you see yourself is key to how you will face the issues past and present.

Currently, your judgment of your wife borrows heavily from her past behaviour. Your focus can only change if you make the right choices.

Choose your associations, values, goals and priorities carefully since these are key in determining the path you will take in life.

Secondly, forgiveness does wonders for any marriage. If done well, forgiveness will open your heart to put the wrongs behind you and offer you a fresh start.

You seem to carry a heavy load from your past that includes the unresolved issues before marriage, whose consequences still vibrates in your mind.

Your children grow on one strong belief that there is only one right family relationship, and that is the one made of mum and dad.

This is where they learn patience, endurance, forgiveness and trust. Because of the many dysfunctions, other relationships may present a conflict or betrayal of that basic understanding of life.

Third, our relationships become what we believe in and practice. If a person constantly tells lies, that is what the relationship becomes.

Such lies will be responsible for creating an environment of doubt and mistrust. However, knowing that we have complete control about what we think, believe, and do will help us make better choices.

Remember, you are the only one with the power of acknowledging who your wife has become and who she could be if the right choices are made today.

I suggest that you take charge of the path for change by not allowing the past to negatively influence you.

Someone once said that the way to a successful life is to stop feeding one’s mind with negative thoughts.