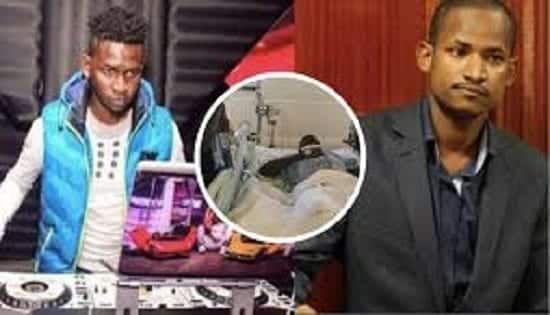 Extorting? Nairobi Hospital is on the spot for hiking Felix Orinda aka DJ Evolve’s bill from Ksh900,000 on Sunday to Ksh3 million today, after Embakasi MP Babu Owino, who is footing the bill, was released on bail.

Babu was released on a Ksh10 million bail, an amount that would be used to cater for DJ Evolve’s hospital bill.

After learning of the same, it is said that the bill shot so fast, a development thought to be a way of extorting the legislator.

Babu said that he is footing the bill not because he is guilty, but out of humanitarian grounds and because the DJ is his friend.

He however questioned the Director of Public Prosecution (DPP) Noordin Haji move to appeal the bail ruling, saying that if cancelled, he (Babu) will be unable to recover the money which is being used to pay hospital bills for Evolve.

“We are going for revision against the ruling given at the Milimani High Courts. We have unanimously agreed as an office about this. We will also be speaking to the Judicial Service Commission on this gross irregularity. I cannot fathom this. I have never heard such a ruling before,”  said Haji.
Related Posts
NEWS

Owino was released on Monday, January 27, on a Sh10 million cash bail to be deposited in four installments over the next three months.

Chief magistrate Andayi in his ruling indicated that the lawmaker should not take alcohol nor narcotic drugs in public establishments until the case is heard and determined.