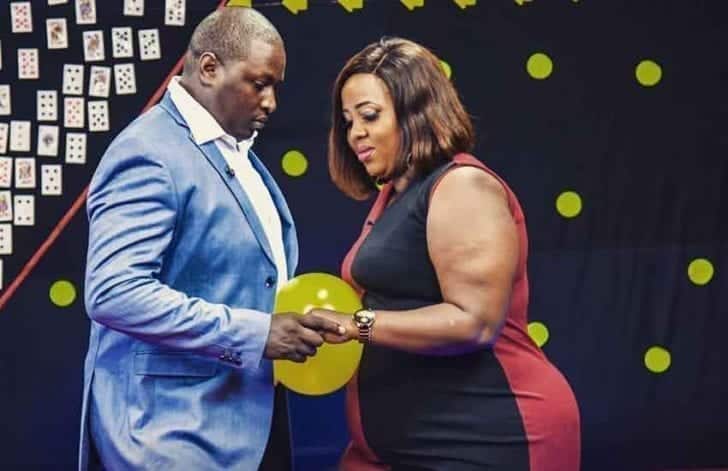 Speaking to K24, Chebby and Terrence revealed that Churchill, at the time, advised them on how to keep it together as the scandal rocked their marriage.

Chebby explained that Churchill asked them not to address the matter publicly as it would fuel it more.

“We need to thank our boss Ndambuki. He’s been our mentor and friend. In fact, that time when all was happening alikuwa anatuambia keep it rooted, don’t answer anyone, don’t say anything, and just be easy,” Milly said.

She narrated that she was in a state of confusion and never saw the purpose of living after she discovered that her husband had cheated.

“When it happened last year, I was so confused, I almost lost it, literally. I never saw the purpose of living. Everyone spreading lies you can’t even explain the truth or tell your side of the story.” She said.

Admitting that she was aware of it before it became public, Chebby noted that she was in a state of despair because she could not give her own side of the story.

“Actually, what was eating me more is the fact that I couldn’t give my side of the story. I was aware of it before it became public,” she told Betty.

On the same interview, Terence – real name Lawrence Mwangi Macharia, showered Milly with praise, revealing that she stood by him even when he was in a dark corner.

“There is one thing I respect about Chebet. A lot of people that have been involved with whatever was happening, they have been involved with Terence Creative. Chebet has always been here for Lawrence Mwangi Macharia. When I was in that corner, gambling, smoking, even when I was a ratchet that nobody would admire – they were not there. I really apologized to her because I betrayed her,” he said.

According to insiders, Terence cheated with a then 19-year-old environmentalist, Anita Soina.

“Is it true that you cheated on Chebby?” A follower asked as the affair blew up.

“Yes I did, through it, I’ve learnt my lesson, Milly and I will talk about it someday,” Terence responded saying.

According to the comic, it was a lesson learnt.

“Things will always happen in life, the most important thing is to always put your wife in the loop. Mwambie this is your weakness akusaidie because if you don’t do that, you’ll keep on being blackmailed and people will do anything to bring you down. A lot of women will call waseme vitu mingi sana but its okay,” he added.

“I want to be very categorical if you call us ‘couple goals’, it is your choice,” reiterated Chebby.

DEVOTION:DO NOT SEEK THEIR APPROVAL!