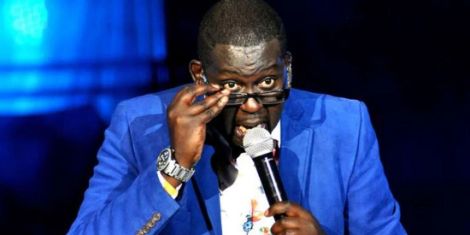 After her performance, she asked Churchill if she could meet his creative director, who is also Teacher Wanjiuku’s husband.

The host then called out Ber to the stage so Wangari could face him and show that she had eventually come of age, even after he had told her off during a past show.

“He told me ‘get out of here you can’t sing!’. I went home and asked myself, dear God, did I come to this earth to be told like that [sic]?” Wangari recalled.

VIDEO: The Golden Times-Chris Kamau boy on Blueband Ad in…

Victor then justified why he had treated Wangari as he did, by acknowledging ” Now she is alright. That time she couldn’t sing so I chased her away, knowing that she would be challenged to improve.”

“If you’re rejected don’t go and sulk, don’t hang yourself. Go and work harder and one day your star is going to shine,” Wangari encouraged the crowd that had attended the show.

Before she got into music, she used to perform set books alongside Churchill at the Kenya National Theatre.

He was then spotted by talent scouts among them Victor Ber.