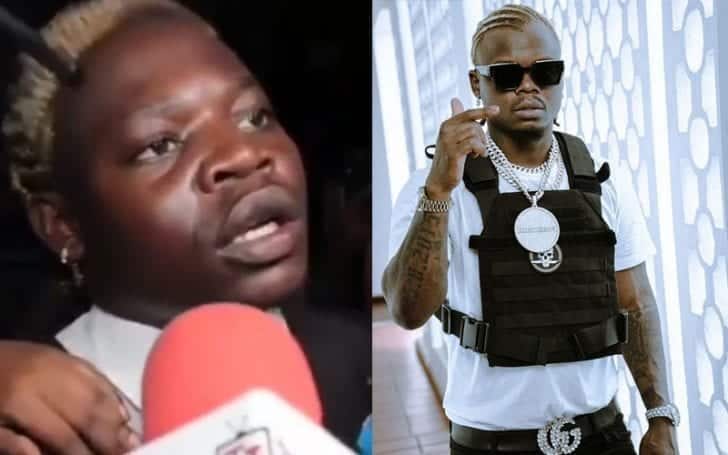 A woman in Tanzania unleashed her wrath on her date who impersonated Bongo star Rajabu Abdul Kahali better known as Harmonize. According to reports, the said man’s ploy have worked at first as he even dyed his hair to resemble Harmonize.

However, all hell broke loose when the two were swamped by a team of reporters during the alleged date. The reporters wanted to know if the man in question was indeed singer Harmonize, considering how much the two resembled each other.

The clearly irritated lady viciously attacked the man with blows infront of the cameras after she found out he was lying about being a celebrity.  The two are said to have met online and the Harmonize-wannabe sealed a date with the beauty after convincing her that he was the Uno hitmaker.

In his defense, the man said people do tell him that he looks like Harmonize a lot.

“I look like harmonize, I don’t say I look like him but people tell me that I do,” he said.

“But you lied to me on Instagram that you are Harmonize,” the lady said while beating up the helpless man.Watch video below:

He went on to claim that he loved her as she told him to keep away because he might even be infected with coronavirus.  Less than five months ago, an almost similar but different scenario involving a Kenyan woman emerged.

A Kenyan lady believed to be from Mombasa shocked many when she revealed that she would commit suicide if celebrated singer Mbosso didn’t love her. The lady, only identified as Munira, had allegedly camped outside Wasafi records in Tanzania for days waiting to confess her love to Mbosso.

“I love him. There are so many men in Kenya that want to marry me but I’m not ready. I came to look for Mbosso and I’m ready to do anything. I love him so much. I loved him since Yamoto Band. I sold my phone to get fare to come to Tanzania,” Munira said in an interview.

The young lady is said to have jumped in front of Mbosso’s car and refused to move away while demanding audience with him.

”She started becoming a nuisance, calling with different numbers. I ordered my team to block all her numbers. The last time I saw her was at Diamond’s gate, I was mad and I asked her to go back home,” Mbosso revealed.

The singer later termed the act as pure stupidity and insisted that he had no time for a relationship formed out of nowhere as he has a family to raise.

“I cannot blame her for that, she says she loves me but it’s hard to accept her love because I have a family and children to take care of and a lot of things to do. Getting into a relationship with someone from nowhere I can say is just stupidity,” he said.