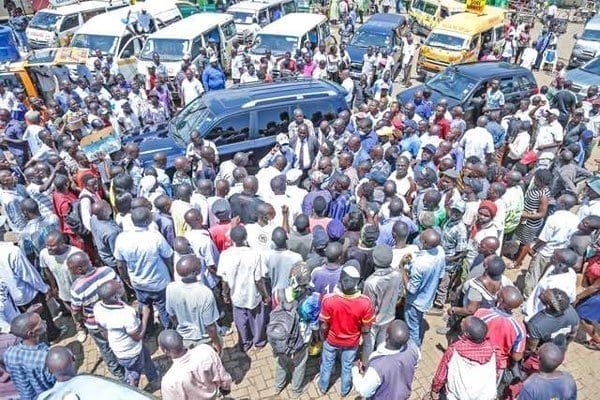 Most Kenyans are not obeying the health guidelines the government has issued to prevent the spread of the coronavirus, the Nation has established.

The social distance rule continued to be flouted as many mingled and socialised away from home.

Save for bars and entertainment joints, which have shut their doors, the rest of the country appeared unbothered as of Monday.

In Uasin Gishu, Eldoret West OCS Mike Lekalaille was seen in a video that went viral driving through the town and appealing to people to go back home through a megaphone.

“I am your OCS and I mind about your lives. Let us go home. If you want a good life, don’t wait for the virus to arrive. Save the lives of your family members,” he said.

In the capital, some restaurants chose to shut down while others secretly served their clients behind closed doors.

Markets like Toi, Gikomba, Muthurwa, Dagoretti and Mutindwa continued their normal operations, but the stalls were not as full as usual. Traders said they had no option but to open shop.

“If I stay at home, my children will still expect to eat at the end of the day. Will the government provide that?” Ms Catherine Nyambura, a trader at Muthurwa, posed.

This dance with death was replicated across the country as the government, in a dilemma on how to implement its guidelines, resorted to issuing more threats.

But enforcement on the ground appears to be lacking. Police kept off the streets, despite the expectation by Kenyans that they will be around to enforce the stern warnings issued by Interior Principal Secretary Karanja Kibicho on Sunday.

All police officers and National Youth Service (NYS) personnel have been put on standby to help the government deal with the crisis.

Inspector-General Hillary Mutyambai ordered all officers back to their work stations during the weekend.

“Due to the unfolding events related to the coronavirus, the Inspector-General has cancelled all annual leaves except those pertaining to officers proceeding for their terminal leave,” said a circular issued to all police stations on Friday evening.

Meanwhile, the military has been ordered to assist in preparing for additional isolation, quarantine and treatment facilities in the event there is an explosion of infections that will overwhelm the country’s public health system.

The effects of tough new measures announced on Sunday kicked in Monday as economic activities slowed down and public service vehicles jerked up their fares by up to 50 per cent.
Half their capacity.

Operators told the Nation that this was necessary in order to cover for the shortfall in earning as vehicles are now carrying about half their capacity. They argued that it was wrong for the government to ask them to carry less passengers and charge them the usual fares while the cost of fuel and other components was still the same.

“The cost of business is very high,” said Matatu Owners Association (MOA) chairman Simon Kimutai. And since the state has no stake in the public transport sector, there is no way it can enforce how much passengers can be charged, leaving them at the mercy of operators.

In Nairobi, the fare from Kasarani shot up from Sh60 to Sh100. Passengers from Utawala to Nairobi were paying Sh200 up from Sh100, while those from Limuru were being charged Sh150 up from Sh80.
Monday evening, Health Cabinet Secretary Mutahi Kagwe appealed to the transport sector to bear with the situation.

“As I said before, the economy will experience some shocks. For one sector to punish everyone else is immoral,” he said. “…doing so (is) counterproductive,” the CS added.