An investigative feature by the BBC’s Africa Eye, aired on April 6, brought to light how Kenyan multi-billion construction firm Spencon, was brought to its knees by two British nationals in just 18 months.

The pair, Andrew Ross and Steven Haswell, were appointed as directors of the company by US investment firm Emerging Capital Partners (ECP), in 2015 to steer what was once East Africa’s biggest construction firm back to the top.

ECP had injected Ksh1.5 billion with the British government chipping in an additional Ksh150 million in aid money to help create even more jobs.

However, in just 18 months, the firm declared bankruptcy, leaving hundreds of Kenyans in a state of depression after going for over 7 months without pay prior to the company’s collapse in November 2016.
Related Posts
NEWS

Thousands of emails retrieved by Africa Eye’s investigative team have raised concerns of alleged fraud, bribery and other highly questionable business practices which at some point included a partnership with the infamous Akasha brothers as enforcers to scare off anyone identified as a possible threat.

Ross and Haswell stood atop a tall office complex in the Upper Hill neighbourhood of Nairobi, where the company was headquartered and oversaw the rapid death of a company that held the hopes and dreams of hundreds of Kenyans.

An assistant mechanic, Wycliffe Ochieng, was one of the employees who took pride in his work at the firm, as he was able to afford a nice apartment in the country’s capital where he lived with his wife and young daughter.

However, following the collapse, Ochieng was forced to move back upcountry to his father’s homestead where he currently shares a mud hut and bed with his young family.

All he has to show for his tenure at Spencon is a safety helmet and navy blue overalls.

“I used to take care of my family as a man should. It has really brought down my self-esteem,” he said, dejectedly, during his interview with the Africa Eye team.

According to the exposé, trouble was brewing in the company as early as April 2015.

Despite Ross assuring all his employees that all was well, an email sent out by Haswell that was shared by the investigative team painted a different picture.

“I think we are going to lose this patient. We have 4 months of cash left. It’s not looking good,” it reads in part.

In a bid to cut down on costs, Ross and Haswell relocated the firm’s headquarters from the lofty Upperhill towers, to one of its out-of-town workshops.

However, this marked the beginning of a spending spree that milked the firm dry

Just a week into their new location, the duo splashed Ksh7 million on their own company cars with Haswell later on, telling Africa Eye that the cars were meant to create an image of a thriving company.

Not stopping there, the two embarked on a grand construction project, not one that would bring in revenue, but their very own golf green course where they could work on their strokes. 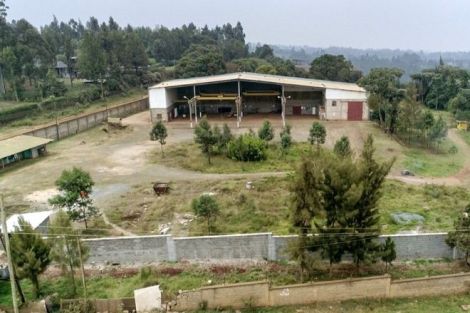 The depot outside Nairobi where Ross and Haswell relocated Spencon.

According to the investigative feature, the firm hired a  groundsman from one of Kenya’s elite golf clubs, who is said to have exhausted 120 tonnes of sand on the project.

When quizzed on why they decided to splash so much money on such a project, the duo once again claimed that it projected the image of a company that was on top of its game.

However, behind the scenes, finances were dwindling leading the pair’s next move.

Simeon Randinga, a former employee at the firm, revealed to the BBC team that by mid-July, the two secretly hired Tony Sanghani, and tasked him with selling off the company’s prized assets.

Notably, In 2002, Tony Sanghani and his brother Rajendra Sanghani were charged with robbery with violence. The two were then locked up at Kamiti Maximum Security prison after being accused of inciting their guards into beating two men.

Despite his questionable record, Sanghani was enrolled into Spencon’s payroll where he took home Ksh2 million a month, on top of 25% commission on any sale he made, an audit by accounting firm PWC revealed. He was also handed a fully furnished apartment and a driver.

The accounting firm also unearthed a huge discrepancy in the company’s books, with at least Ksh160 million unaccounted for up to date

Ross and Haswell in their defence, claimed that they did so in order to protect the money from dubious court seizure orders.

Their dealings with questionable characters were further highlighted when Pragnesh Patel (whose father owned Spencon in 1979), filed an ownership lawsuit against them.

Speaking to the Africa Eye team, Patel revealed that the two called him to a meeting at a posh hotel in Nairobi where they went on threaten to unleash members of the Akasha family on him -in not so many words.

In August 2019, Baktash and his younger brother Ibrahim Akasha were charged for exporting tonnes of heroin to the United States.

They pleaded guilty to the charges and agreed to a plea bargain with the office of the Manhattan district attorney.

Notably, Vicky Goswami, who offered crucial testimony during the Akasha’s trial told the court that brothers carried out violent attacks on associates of another rival drug trafficker Ali Punjani, including the kidnapping of an individual known as “Speedy” and the near-fatal assault of Tony Sanghani.

With such individuals in their camp, Patel eased off but not before he secretly recorded the conversation in which Akashas were mentioned.

The duo soon fled Kenya after the coffers ran dry, and are reportedly currently working as top executives at firms in the UK

Ross was on a golfing holiday somewhere in Turkey when he finally signed insolvency papers for the collapsed firm in November 2016, while back at their makeshift headquarter, court bailiffs were seizing company property and the staff who had gone for over half a year were in full revolt.

Quizzed on their abrupt departure, Ross and Haswell stated that they left the country because they were facing ‘threats’.