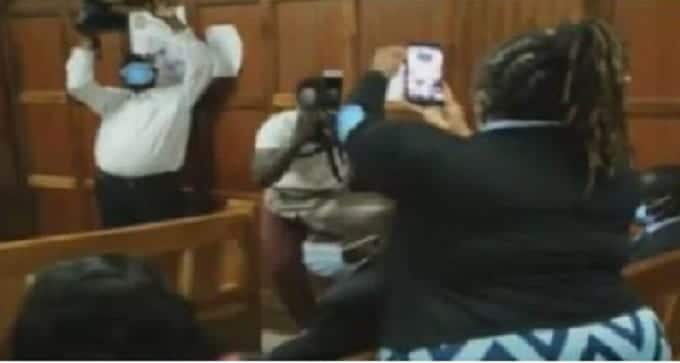 The name Jane Mugo is quickly becoming more synonymous with drama than with spy queen. Barely a fortnight after a documentary on the private detective broke the internet, Jane Mugo caused drama in court on Wednesday, February 3 during a confrontation with journalists.

Mugo was appearing for the hearing of a case in which she is charged with threatening to kill a man. She appeared after Nairobi Chief Magistrate Martha Mutuku had on Monday given her a last warning for failing to attend the trial.

At the court precincts in Nairobi, Jane Mugo didn’t take too kindly to reporters doing their jobs.

As the reporters follow her into the courts, she can also be heard saying: “Follow me if you’re man enough.”

The confrontation spilled into the courtroom, where an emotion-charged Jane Mugo accused reporters of taking photos of suspects with a view to soliciting money from them.

“Take a picture or tell me to pose for one. Take me a picture. Are you not tired of making me trend? Don’t provoke me,” she warned, adding: “No more intimidation from corrupt journalists who are unprofessional…and you can quote me.”

At some point, the private detective stands up from the dock and starts recording the reporters saying: “Let me see your faces tupatane huko nje”.

Eventually, Jane Mugo was seemingly overwhelmed with emotions as she became teary and her voice cracked.

“Why are you asking me for money in court na Judge alikataa?”

With regards to the case proceeding, Jane presented a medical report proving she was sick and could not attend court on Monday.

VIDEO of the Day: Kenyan man Busted by 7 Girlfriends after Cheating on Them

Video:Five young Kenyans are languishing in a crowded prison in Accra