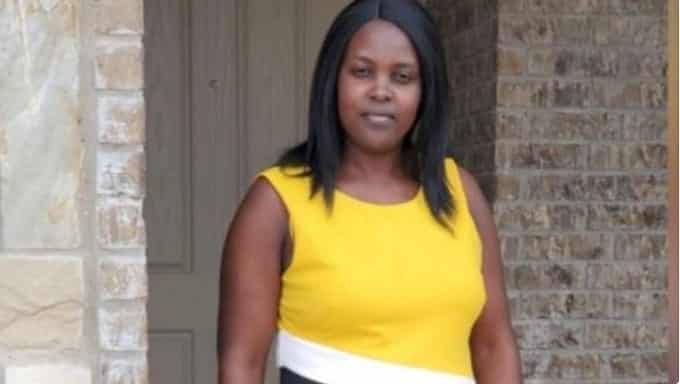 A chilling interview with Dorothy Moraa’s sister giving details of what they new about the relation between Dorothy and the Kenyan man she was co-habiting with a Mr. Obadiah K Kinara.

ABOVE IS LIVE CHAT WITH DOROTHY MORAA’S SISTER AND SECTION OF KENYAN COMMUNITY IN USA, HOSTED BY SUE GACAMBI. IT IS LONG BUT MUST WATCH.

Kenyans of good will have started a petition seeking justice for Dorothy Moraa Ongera Who Died under very mysterious circumstances, allegedly from “drowning in tub water” in her own house according to the husband.

Dorothy Bosibori Ongera is a 35 year-old Kenyan- American citizen who lived in Dallas, Texas, and died on 17th December 2020 at her home – 309 Oliver ct. Kennedale, TX 76060.
At the time of her sudden demise, Ms. Ongera, a mother of six children, was co-habiting with a Mr. Obadiah K Kinara, with whom they had three children.

Ms. Ongera had three other children from her husband – Mr. Dennis Nyakundi Mose, currently living in Kenya.
Mr. Kinara informed the parents (Mr. and Mrs. David Ongera, both permanent residents of the United States of America) and siblings (two of whom are citizens of the United States of America) of the death of Ms. Dorothy Ongera, saying she had drowned in the bath tub and provided no further information thereafter.

Mr. Kinara, who claimed to have been away from the home at the time of the death, called 911 for assistance. However, the deceased’s eldest daughter says she found her mother’s lifeless body (head submerged in bath tub) while their father was playing with her siblings at the backyard.
Mr. Kinara, in contradiction of the children’s sentiments, claims he had driven out of their home to fuel his car in readiness to go to work.
Mr. Kinara, in spite of an agreement with the deceased’s family that they would move her body to a Funeral Home they would jointly identify after a medical examination, he proceeded on his own and secretly moved the body to Golden Gates Funeral Home and cut off all communication with the family of the deceased, including denying them the chance to even view her remains.
Several attempts, including physical visits to his address – the same one they lived with the deceased, to try get Mr. Kinara to explain what was going on proved futile as he declined to answer calls and could not respond to the doorbell at his house.

The deceased’s family was forced to seek for the intervention of the Court to have custody of the children following the deceased’s daughter’s text to her late mother’s family saying they were suffering in the hands of Mr. Kinara following their mother’s sudden death.
It took the intervention of, following a child custody suit, the Sherriff to get the children moved from Mr. Kinara’s custody to the hands of the deceased’s sister as a safety precaution pending resolution of the sticky issues.
The fact that the deceased’s family were isolated and barred from knowledge of what was going and access to even view the body on account of Mr. Kinara having instructed the funeral home that he had the exclusive authority over the remains of the deceased, prompted the father – Mr. David to seek an injunction and orders stopping any action on the body until the question of who the legal next of kin is.
The matter was dropped at the lower court for lack of jurisdiction.
They filed the matter afresh at the Probate Court No. 2 in Tarrant County, before Judge Brooke Allen. There is a mention on 12th February 2021 (mention) and on 23rd March 2021 (full hearing).

Shockingly, during the mention in court on 29th January 2021, the family was told before Judge Brooke Allen that Dorothy’s body had been buried he previous day. Even the Judge was shocked that in the course of litigation over who would have the rights over her remains, the defendant (Mr. Kinara) had gone ahead and secretly interred the remains at a public cemetery without the involvement of the family.
Dallas police have, reportedly cleared any possible human hand in the mysterious death but the family believes the fact that they have been denied any opportunity to have access to their sister and daughter who is now buried in secret is evidence of something fishy having happened to Ms. Dorothy Ongera. They had no knowledge of the first autopsy and they are left wondering why they could not be allowed to have a second autopsy conducted to ascertain the cause of death.
The children have expressed themselves to the suggestion of possible abuse and molestation of the children, especially the three that are from the legal husband and there is reason for authorities to investigate the claims by the children.
They are seeking to have the body exhumed and an autopsy conducted before according her a decent burial in accordance with the desires of their hearts.