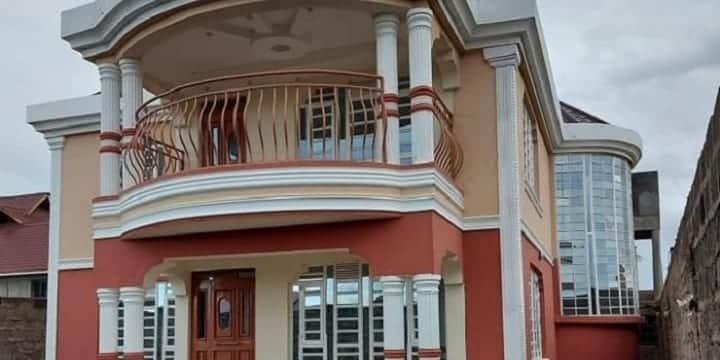 A Kenyan Diaspora woman residing in Boston, US gifted a multi-million mansion she had built back home to her new neighbours in Thika Town.

Speaking to Kenyans.co.ke on Tuesday, May 4, musician Karangu Muraya stated that the lady asked Thika Salama Estate residents to use the house as a prayer centre.

He further disclosed that Naomi Mwaniki is a renowned pastor in Massachusetts, the 21st most populous city in the US.

According to Muraya, the deacon blessed the estate residents with the prayer centre, dubbed Mt Zion, a few years after she relocated to Thika.

“I can’t recall how much the house cost but it is quite expensive and it took a few years to build.

“She recently moved into the area, bought land and settled near us,” Muraya, the custodian and caretaker stated.

The two-storeyed house has several rooms, from open spaces to furnished bedrooms and a kitchen. The bedrooms have double-decker beds all spread with pink duvets.

Its modern kitchen was fitted with an oven and utensils. The floor of the prayer centre was designed with white and brown tiles.

On his social media pages, Muraya called upon Thika residents and all Kenyans to use the centre in their quest to speak with God and to also fellowship together as a family. The musicians added that the house will be officially unveiled on Saturday, May 15.

“You ask why some people are so blessed. Imagine building a beautiful home like this. And for your love in the body of Christ, you make it a prayer centre.

“This is what Naomi Mwaniki has done for us and Kenyans at large. Let’s meet here as we launch it and dedicate it to God,” Muraya appreciated and asked intercessors to profess blessings on the US-based pastor.