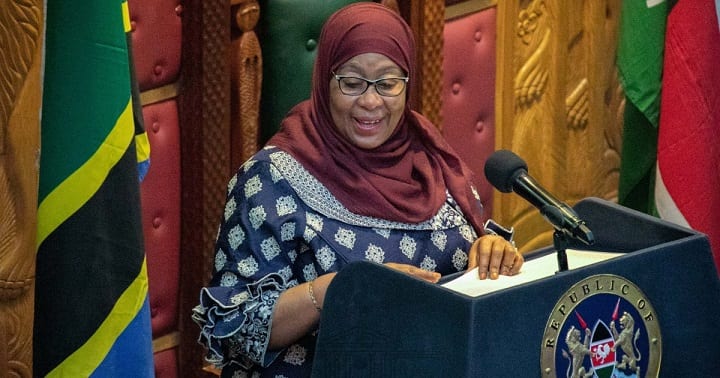 Tanzanian President Samia Hassan Suluhu, during the second day of her official state visit to Kenya, addressed a joint sitting of both the Senate and the National Assembly.

In the Wednesday, May 5, address, Suluhu was invited to speak by Senate Speaker Kenneth Lusaka, who, in his invitation speech, struggled to pronounce some figures in Swahili, leaving the lawmakers in stitches.

In her speech, the Chama Cha Mapinduzi (CCM) chairperson commended the House for adopting a Kiswahili version of the Standing Orders saying, the move had motivated her to start watching the proceedings. “We follow your proceedings because what you discuss affects us. You challenge us with the level of debates and democratic processes. I specifically began following the proceedings because of the use of the Kiswahili language,” said Suluhu.

However, she made fun of how some lawmakers struggle to communicate in the language saying, it made the sessions hilarious. I enjoy your Kiswahili parliamentary sessions. Kiswahili chenyu kina vionjo vingi ambavyo pekee ni burudani tosha (Your different Swahili flavours are entertainment enough),” she added. In a move perceived to avoid an ’embarrassment’, Speaker Justin Muturi read the concluding vote of thanks in English.

President Uhuru Kenyatta on Thursday, November 12, 2020, during the State of the Nation address, unveiled the Kiswahili version of the National Assembly Standing Orders

Suluhu, in her speech in the House, described the coronavirus pandemic as a common enemy that must be fought by all means. Suluhu said Tanzania would collaborate with Kenya and the international community to combat the spread of the disease in the region, adding that her country was not an island. “COVID-19 has affected the growth of our economy and has changed our ways of life. Coronavirus has made us mask up. It is a common enemy and we have put down measures to contain the spread. We Tanzanians are not an island and we are part of the international community,” she said.