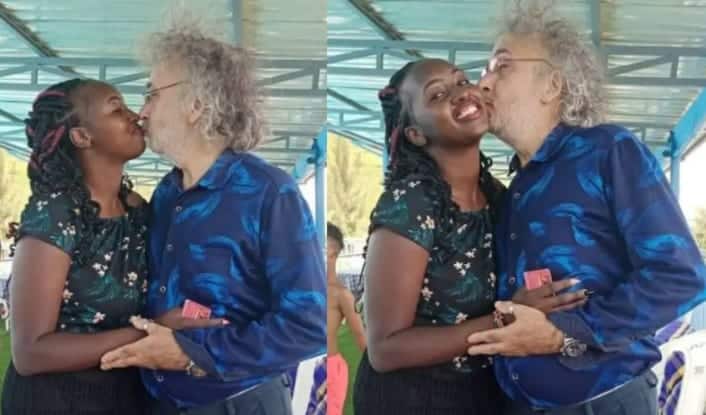 A 60 year old Mzungu man Sold everything in Germany to move to Kenya and  Live with his 28 years old Kenyan Wife Ciru Njuguna. Ciru and her mzungu man have an age difference of 32 years, and they are madly in love with each other.

They say love is blind, and the relationship between Nakuru-based lady Ciru Njuguna and her mzungu husband is a great example. The couple is often criticised for their huge gap age difference, but they have given a deaf ear to trolls.

On Saturday, the couple was on NTV’s Gumzo La Sato show, where they shared their story with hosts Frida Mwaka and Lofty Matambo. Greg, who is the breadwinner of his family, said:

“I sold everything I had in Germany and came to Kenya because I wanted a family with Mary.” Asked if he wasn’t afraid to relocate because most Kenyan women are known to take advantage of white men, the German national said they had known each other for seven and a half years, and he trusted her. “It didn’t really matter to me what people would say,” he said.

Greg and Ciru are blessed with twin boys who arewill be turning eight years old in a few weeks time.

Advising those in a relationship like his, Greg, during an interview with NTV, said: “Take what other people say with a pinch of salt. Invest into your relationship.”