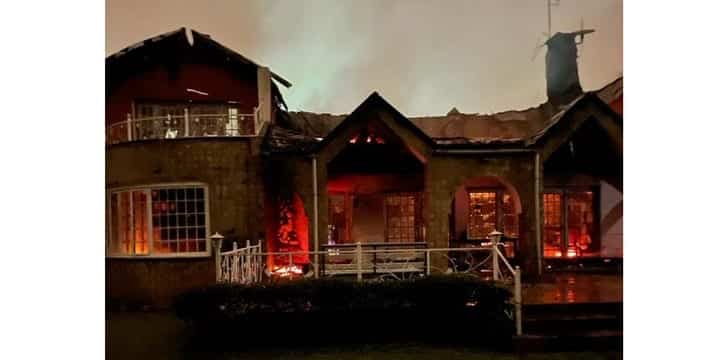 Police are investigating the cause an inferno that occurred at the home of political analyst Prof Mutahi Ngunyi early Wednesday.

According to authorities, the fire broke out at around 1am from the ceiling of one of the rooms before spreading to other parts of the house located in Runda.

No one was injured in the incident that was reported at the Runda Evergreen Police Station.

Prof Ngunyi, his wife and their househelp were in the house when the fire broke out but they all escaped unhurt.

Firefighters from Kiambu and Nairobi counties managed to put out the fire by 4am.

When the Nation visited the scene at around 10am, some parts of the house were still smouldering.

“We are under firm instructions not to allow anyone in,” said the guards manning the home.

Nairobi regional commander Augustine Nthumbi confirmed that Prof Ngunyi had recorded a statement on the incident.

On Twitter, the vocal lawyer linked the fire to a clip he had released on the infamous Kiambaa church arson that claimed the lives of innocent Kenyans at the height of the 2007 post election violence.

My FREN @OleItumbi MY house in Runda for 27 years WENT on FIRE at 1.45 am. You TOLD the Hustlers at 2.01 am. About 16 minutes LATER. That is after I talked about KIAMBAA violence of 2008 on 5th Estate. Here is a BETTER picture than the one you POSTED. Enjoy. pic.twitter.com/w95WiY34H0