The Kenyan Billionaire Woman Lizzie Wanyoike has an inspiring story: Kenyan corporate scene has in the past been dominated by members of the male gender – mirroring many other sectors in society.

However, the proverbial glass ceiling is slowly but steadily being broken by trailblazing women who have worked hard to beat societal stereotypes and make a mark for themselves as respected entrepreneurs. And, of course, they have made a fortune along the way.

Kenyans.co.ke tells these stories to inspire and celebrate entrepreneurship and innovation.

If a list of zealous women in Kenya were to be listed, the name of Lizzy Muthoka Wanyoike, would definitely not miss out.

Lizzie has made a name for herself, especially in the education sector, and is one of the few women who have built a multibillion empire stretching to real estate and hospitality.

Her journey begins in Murang’a County in the 1950s, having been born as the sixth born to her father, a chief and her mother, a housewife.

When she became of age, Lizzie attended Gathuki-ini Primary School and later Kahuhia Girls High School, where she graduated with a high school diploma.

She would later attend Kenyatta College (now Kenyatta University) – where she attained a Diploma in Education.

During this time, Lizzie had a boyfriend who would occasionally take her out on dates.

After she attained her diploma, her boyfriend helped her get admission at the Young Women’s Christian Association (YWCA) hostel where she was to stay until she got a job.

There was, however, a quick turn of events after she got pregnant and had to get married in 1972.

“He was a divorced man who had three children and so when I got pregnant, he took me to his house and later paid dowry,” she recalled in a previous interview.

During this period, Lizzie embarked on her life-long dream as a secondary school teacher at State House Girls’ School in Nairobi, where she used to earn Ksh 961 a month.

She called it quits after three years and began a school of her own. Together with her husband and a few partners, she opened the Temple College of Secretarial Studies in Nairobi.

From the business, she accumulated some savings and invested in buying land and saving some money.

At this point, her marriage was not working and the 16-year difference between her and the husband was not helping either.

“I had invested a lot in the marriage. However, we did not take time to know each other before marriage. We did not have a lot in common especially because of the age gap.

“One day when I went home, the security officers refused to open the gate for me. They said my husband had authorised them not to,” she narrated in a previous interview.

Armed only with her handbag and her car, she left her matrimonial home. She did not get a share of any of her husband’s property and was practically left homeless.

Their marriage of 15 years had ended.

Left with no option, she sought refuge at the Young Women’s Christian Association (YWCA) hostel where she once stayed. She was now 40-years-old.

Having left her husband’s house without anything, she sought to begin a college with her savings in her quest to mentor young girls and ensure that they got an education.

Lizzie had Ksh6 million worth of savings in her account which helped her secure a Ksh4 million loan at a local bank.

With Ksh10 million, Lizzie began the Nairobi Institute of Business Studies (NIBS). The business struggled for eight months but slowly began to pick up.

The college, which had only 25 students when it started, now has over 6,000 learners, staff numbering over 250 on four campuses including Ongata Rongai, Thika Town, Nairobi Central Business District and Ruiru-Kimbo, along Thika Highway.

She has also built a four-star hotel in Kileleshwa for business and hospitality training.

Her newest addition is Lizzie Wanyoike Preparatory School that boasts a warm learning environment and dedicated teachers providing an exciting, ever-evolving curriculum that meets each child’s individual needs and interests. 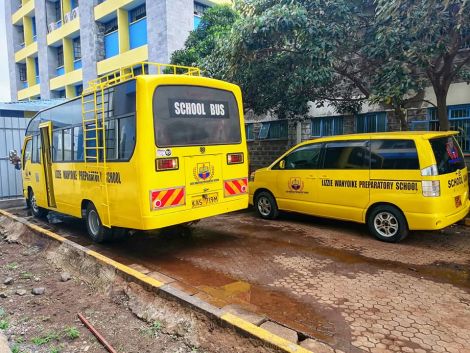 Word of the Day:Consistency of Character

A US Program to bring Kenyan entrepreneurs to Chicago