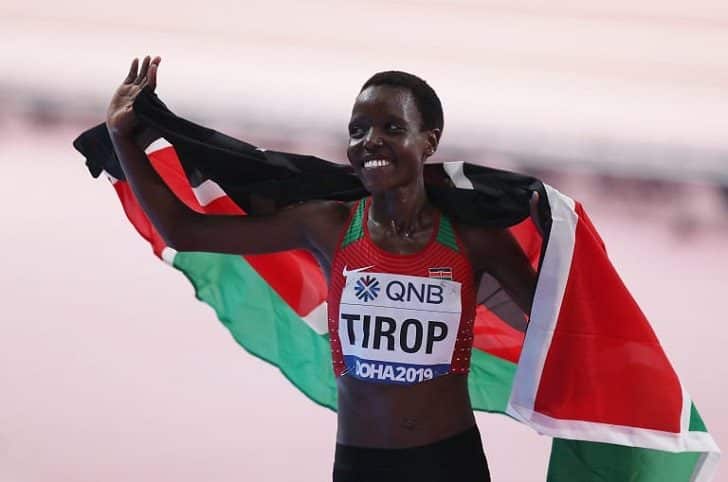 The family of slain Olympic athlete Agnes Tirop has revealed disturbing details of her troubled marriage.

The family has now revealed that Agnes complained to them on multiple occasions of how her husband harassed her in the course of their marriage.

They have since demanded that the wealth their daughter accumulated be returned to them, revealing that she attached the name of her husband to all her estate.

Agnes had began a project at Kapnyamisa village in Mosoriot, Nandi County, where she had alredy built a cow shed, pending purchase of the animals.

Her brother, Josephat Keter, revealed that the deceased athlete supported the education of many children in the area, by paying their school fees.

However, they detailed that the troubles she endured in her marriage, led to her untimely demise.

According to her other brother, Macdonald Kiprotich, Agnes was killed for the money she had accumulated.

Agnes’ mother Tina, stated that she knew the man, but to the best of her knowledge, they were never married.

“When she came back from Tokyo, she found him entertaining other women and she came back home and told us, she had differences with Manu,” Kiprotich said.

The brothers alleged that the man identified as Emmanuel or Manu, convinced their sister to return home on Monday, October 11.

According to the family, the events leading to her death appeared fishy.

Agnes’ phone went off until her lifeless body was discovered on Wednesday morning.

Yesterday, the Directorate of Criminal Investigations (DCI) arrested a man identified as Ibrahim Rotich, who is a suspect in the murder of Agnes, in Changamwe, Mombasa, while he allegedly attempted to flee the country.

Story of Kenyan Man Thriving in US With Life-Changing Initiatives

Word of the Day:An Attitude of Gratitude