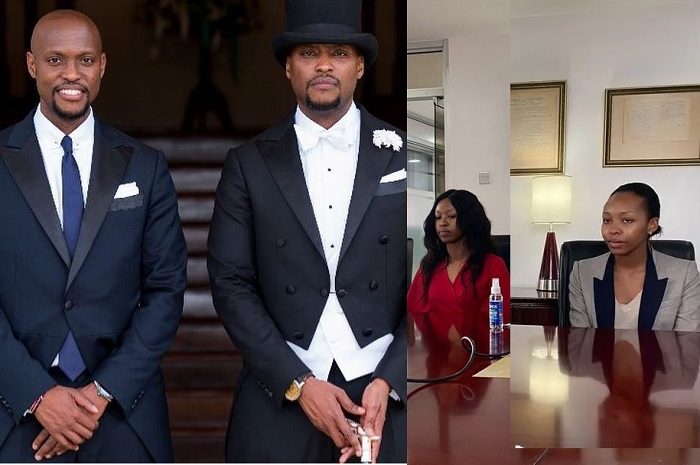 Murgor Sisters Accused of Lying: A woman who was in the company of the Ndichu twin brothers, Eddie and Paul, during an altercation at Nairobi’s Emara Ole Sereni Hotel has spoken out.

Ms Munira Hassan spoke after the two sisters who claim they were assaulted by twin brothers called a presser on Wednesday to demand justice.

The Senior Counsel, who is representing his nieces through his firm Murgor & Murgor  Advocates, narrated how one of the Ndichu brothers, who was dressed in black, choked Stephanie moments after he had hit on her.

“When her boyfriend Samuel attempted to rescue her he was also grabbed by the throat. After a few seconds he let go of the two extremely shaken couple but went on to threaten them by stating he had marked their faces,” Murgor said.

“Ms. Cheryl Murgor and Ms. Stephanie Murgor and their friends then proceeded to the lift hoping to escape further confrontation. At the ground floor, Stephanie and Samuel went to bring the car round, while Cheryl and Patrick waited at the lobby.

Kenyans must strongly condemn the normalisation of violence against women. GBV is a blatant abuse of human rights & this impunity threatens all of us. Let us speak up for our daughters, sisters, wives, nieces, grandmothers & the voiceless victims that GOK must protect. #EndGBV pic.twitter.com/palZY27GU8

“At the entrance, one of the brothers violently broke the right-hand door side mirror while the other one broke the left-hand side one before they again went to attack Cheryl. During the incident, the brothers threatened to shoot them,” Murgor said.

The lawyer demanded that the Inspector General of Police Hillary Mutyambai assigns a probe into the incident to a special team at Police Headquarters.

Moments after the Murgor sisters told their story, the Ndichus’ lady friend Ms Hassan termed their claims as lies.

Ms Hassan claimed the Murgor sisters attacked her and produced a medical report that shows she had bruises.

She said Eddie Ndichu and Paul Ndichu were trying to rescue her from the attack by one of the Murigor sisters and her boyfriend.

“As a result, my hair was painfully plucked from my scalp… I was unconscious for a few seconds and left with bruises on my body and a bloody scar on my forehead as per the attached medical report,” she said.

“The twins ran back in to help me and get this crazy lady off me because she wouldn’t let my hair go,” she said.

Hassan said a police probe would reveal the whole truth.

Video:Mike Sonko reveals Source of wealth and why he believes in sharing with the…