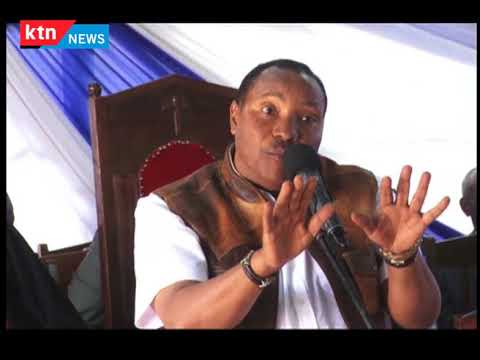 The Government has agreed to consider compensation for victims of the recent demolitions in Nairobi but only on a case by case basis.

Lands Minister James Orengo while responding to debate on the joint report on the demolitions said only genuine victims will receive some restitution but not equivalent to the value of property demolished or property lost.

He however said the compensation will be pegged on availability of resources.
Orengo regretted the manner the demolitions were carried out but defended the move to clear the area of structures that pose a security threat.

MPs however demanded to know a clear program of compensation with Chief Whip Johnstone Muthama saying victims should know when the compensation will begin.
Nominated MP Millie Odhiambo urged the government to root out influential landlords of informal illegal settlements. She claimed some MPs were landlords to property in Kyangombe.
Turkana central MP Ekwe Ethuro challenged the Lands minister to take advantage of the committee’s recommendations and reform the land sector.

Lari MP David Njuguna urged Orengo to embark on a cleanup of his Ministry to shield Kenyans from fraudsters.
Mutito MP Kiema Kilonzo said compensation must be expedited arguing that if the country has money to fight the al shabaab it should set aside some funds for compensation. Parliament endorsed the report unanimously.

Meanwhile Prime Minister Raila Odinga was on Wednesday exonerated from claims that he owns land in the controversial Syokimau area.
Finance Assistant Minister Oburu Odinga admitted that the Prime minister was one of the directors of the company alleged to own land in Syokimau in 2001 but resigned in 2003.
He accused Water Assistant Minister Ferdinand Waititu of dragging the Prime minister in the demolition saga in a scheme aimed at maligning him.

He spoke even as Lands Minister James Orengo promised to release the names of influential personalities owning land in Syokimau and other areas that were not ready for alienation.
Orengo hinted that most of the names include top government officials and some Members of Parliament own land adjacent to the Jomo Kenyatta International airport.

Gwassi MP John Mbadi demanded to know the connection between the Prime minister owning land and the demolitions also seeking to know whether the land alleged to be owned by the PM is at the same site where the demolitions took place.
Lands Minister Orengo undertook to respond to the issue comprehensively when he responds to the motion by the joint committee probing the recent demolitions in Nairobi.
Orengo was issuing the statement to clarify on documents tabled in parliament yesterday during debate on the committees report.

Orengo said while documents tabled by Assistant Minister Wavinya Ndeti were genuine, her allegations that they were two separate titles for the same land was erroneous.
Orengo also clarified that most of the informal settlements demolished although not within the flight path did not conform to the civil aviation act and were a threat to security.
He informed Parliament that his Ministry has finalized drafting an eviction bill which will guide demolitions.

He however said in future all demolitions will be carried out within the law, urging the internal security docket to coordinate demolition efforts to ensure it is carried out in a humane way.
Parliament is yet to fully adopt the report of the joint committees probing the recent demolitions in Syokimau, Maasai village, eastleigh, Mitumba estates carried out in the city recently.

The report recommends compensation to victims of the demolitions, an audit by government within 90 days of all public land grabbed, an audit of land occupied by security installations, it gives the government 90 days to establish the national land commission and the same time to adopt the Ndungu land report on public land among many other recommendations.