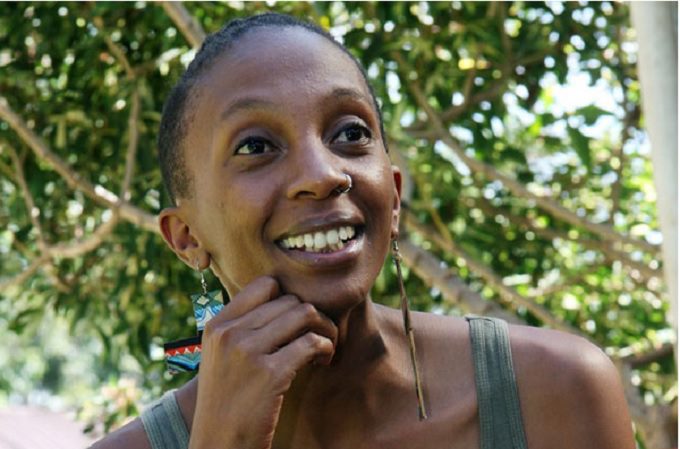 Looking at Thitu Kariba, what you see is an attractive, glamorous, and confident young woman. What you do not see, however, is the heartache and pain she has had to struggle with almost her entire life.

The fact that she can talk about it candidly, is a huge, bold step in her healing process, and she hopes that her story will encourage someone who has been through similar experiences to start living again.

When she was only six years old, Thitu was sexually abused by someone she considered a friend, someone she trusted. The abuse, which went on for a while, greatly confused her, but she did not tell anyone, not even her parents.

This man, Thitu reckons he was in his early twenties, was the gardener.

“He was my playmate — we played hide and seek, he would pretend to be an ambulance and carry me on his back… occasionally, we went to the shops, and he bought me sweets,” recalls Thitu.

With time, these fun games that any child would love took an unusual turn. The “doctor” with the ambulance began to explore more than he should.

Pressure On Diaspora Parents: Sea world In Florida Or In San…

The Momo Suicide Scare: Scariest things children do with…

There was a guest house which was always open, since it served as a laundry room, and the gardener often asked Thitu to go inside with him after playing. On this day, therefore, when he asked her to accompany him, she did not find it strange.

“He used his hands to invade my private parts… that left me feeling very confused. Afterwards, there was a lot of discomfort and I began having burning sensations when urinating,” she says, and adds, “We underestimate just how calculating and deceptive a child abuser can be; not once did I sense the danger coming.”

Despite feeling a sense of impropriety over the gardener’s actions, Thitu, the second born and only girl in a family of four children, did not tell her parents or siblings about what the gardener was doing to her. She was afraid of losing a friend.

After that first time, the gardener promised to buy her sweets and other goodies and told her that if she told her mother what had happened, he would not be able to see her or be her friend anymore.

“They [molesters] weigh between threatening and appealing to the side of the child that likes certain things. They know the child does not want to lose them.”

Thitu does not remember how long the abuse went on, though it reached a point where it became a norm. “When you think it’s normal, you don’t see the need to speak about it,” she remarks.

She clarifies that even though she had an open relationship with her parents, she was hesitant to tell them what was happening.

“It never felt right, I always felt like I would ruin the mood if I shared,” she explains.

Her father worked for a biochemical firm in a position that required a lot of travel. His short stays at home were, therefore, precious and she felt that she would dampen the mood if she opened up.

The gardener eventually left, but that was not the end of the sexual abuse. When she was about 10, she was repeatedly molested by a cousin’s friend while visiting an aunt. This young man was more deliberate in his approach; he would ask her to do certain lewd things to him. Her docile nature never thought of saying “No” or telling her aunt.

Thitu says the first time she felt safe and empowered was when she joined high school. She could choose the subjects to study, classes to attend, and even where to spend her holidays.

She always chose to visit her grandmother in the village, where she felt safe and protected. It was in high school that it became apparent to her that she had been living in a uniquely unfortunate situation. Normal teen life was a fascination and something she endured. Like most teens, Thitu was discovering her sexuality, but unlike her peers, she had already rejected hers.

She recalls an incident where a boy in high school touched her long hair and commented on its beauty. That evening, she shaved her hair. Her reasoning was that if she did not look like a girl, then men would not treat her like one.

She began to dress like a boy and this made her feel empowered. She even joined the boys’ basketball and rugby teams to detach herself from being a girl. In return, the boys in the teams became protective of her, making her stay in high school “comfortable and fun.”

While going through all this, Thitu resented her mother. She believed she should have been aware of what was happening to her.

“I felt this way because she was the one who took me to hospital whenever my genitals itched or when urinating was too painful to bear,” she says.

What held her back from speaking out?

“It had reached a point where I associated femininity with weakness and wanted to encompass what I believed masculinity represented; strength and no tears,” she explains.

But this macho image failed her as well. When she turned 18, she was raped. Despite the previous cases, she had felt that her virginity, which she treasured, had been preserved. But being raped made her feel a huge sense of loss; what she treasured had been taken from her.

“I worked at a hotel in town and was on my way for my 5am shift when my car broke down on Waiyaki Way.”

She abandoned it and ran to the nearest establishment, which was open. It happened to be a bar, where she was fortunate to bump into a friend, who was drinking with a group of men. Her friend informed her that one of the men he was with was heading in her direction and would give her a lift once he finished his drink. Thitu ordered a soda and dashed to the washroom. By the time she returned, her friend had already left. She took a seat and sipped her soda as she waited for the man that was to give her a lift finish his drink.

The man must have laced her soda with a drug because she started to drift in an out of consciousness. This memory is hazy, but when she came to, Thitu realised that she had been raped. That is when her life began to spiral out of control.

Some psychologists believe that individuals who have gone through sexual abuse may go through a sexual promiscuity phase as a coping mechanism. Thitu says she went down this path for two years.

“It was such a dark phase… afterwards, I would wake up, disappointed that I hadn’t died in my sleep,” she recalls.

When she was 24, she was diagnosed as schizophrenic and depressed. Thitu’s concerned family got her psychiatric help.

“I spent most sessions of consultation being drugged with medication and whatever the psychiatrist felt was appropriate. Occasionally, I would be subjected to electric shock therapy, which affected my short-term memory,” she says.

The memory loss eventually cost her her job as head of recruitment at a call centre in Nairobi.

“I began to forget people’s names and what I was required to do at work. From my experience, I believe that you should see a psychologist before you go to a psychiatrist,” says Thitu.

While still under treatment, she had a relationship, her first “proper” one, and had her son.

“The relationship made me feel human, but it didn’t last because I was still in a lot of hurt. The relationship just didn’t stand a chance,” she explains. Her son, who is now 10 years old, is her biggest source of inspiration and motivation.

Most of her memories of her earlier years are erratic and most come in the form of flashbacks or déjà vu. When she is able to piece the memory together, it normally opens a floodgate of emotion that she has taught herself to “embrace” because it helps her to process the pain or hurt she may have experienced.

These memories have given birth to a memoir scheduled for release in June this year. The memoir is titled, My Crown of Beauty for Ashes.

“Writing this book is something I had to do; it was me being selfless after so long. The book is about the pain I have gone through, but also about my healing.”

She hopes that it will help those who have gone through similar situations.

Thitu is in a good place now, a place good enough to be in a fulfilling relationship. It is her young man’s advice, three years ago, that made her see the importance of taking charge of her life. “If you cannot let go of your past, you cannot hold on to the future,” he told her.

It was then that she made a deliberate choice to start living for her own sake and that of her son.

She is in the process of registering an organisation, The Healing Ambassador, whose aim is to run outreach centres where victims of sexual abuse, both male and female, can find support groups for emotional recovery from their trauma. The initiative will also teach self-defence techniques.

“I believe that to understand others’ pain and reach out to help, you need to have gone through that kind of pain,” she says.

Thitu has a certificate in psychology and counselling. Her basis for studying the course was to understand herself and her situation and to be able to express it accurately in her memoirs. She has also found something to help her release any negative energy that may creep in; Zumba, which has made life much more worthwhile. She instructs weekly Zumba classes for pregnant women, as well as those who have recently given birth, in Ridgeways, Nairobi. She also conducts two more classes, one at Oak Place in Garden Estate, and another at Cama Gym in Westlands.

Thitu is yet to tell her family this story. “Some things are difficult to share with loved ones, even if it is for your own good,” she explains.

She only hopes that once they read this, they will finally understand why she behaved the way she did. She also wants to assure them that she is in a good place now and that she has found healing.