The African Muzik Magazine Awards (AFRIMMA) nomination list has been released and voting is on. The award event will take place in Dallas, Texas on July 26, 2014 with live performances from Jamaican Reggae star, DeMarco and Grammy award winner, Tpain among others. Our very own Navio, Wyre, Fally Ipupa are some of the confirmed guests.

Bebe Cool and Navio have been nominated in the category of ‘Best Male East Africa’ tussling it out with Wyre from Kenya, Ben Pol, Diamond Platnumz from Tanzania and Jackie Gosee from Ethiopia.

Irene Ntale and Rema Namakula are in the run for ‘Best Female East Africa’ together with Lady Jaydee from Tanzania, Victoria Kimani and Avril from Kenya.

Radio and Weasel are nominated for the ‘Best African Group’ alongside Nigeria’s P-Square and South Africa’s Mafikizolo among others. Their collabo song with Kenya’s Amani is also nominated in the ‘Best Collabo’ category. 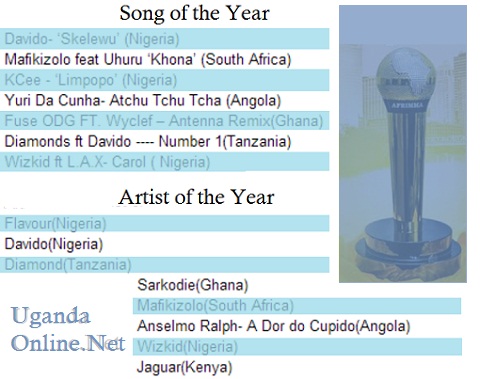 A life of courage: Kenyan embassy bombing survivor sings for peace at Lansdowne…