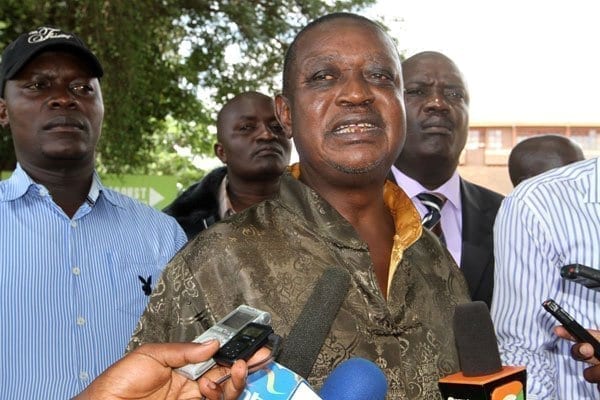 Nominated MP Oburu Oginga has said he will soon record a statement with detectives regarding assassination claims against his younger brother.

Dr Oginga, who has accused some East African Community leaders of plotting to assassinate former Prime Minister Raila Odinga for undermining them, said his claims were valid, and he would record a statement with the CID at a time of his choosing.

He was reacting to Kirinyaga Central MP Joseph Gitari who said at the weekend that Dr Oginga should immediately record a statement with the CID so that they investigate the matter.

Mr Odinga is currently on a two-month tour of the US.

Mr Gitari wondered why anyone would be interested in assassinating Mr Odinga.

“Why would anyone want to assassinate the former Prime Minister yet he has minimal role in the affairs of the East Africa Community?” he asked in an interview with the Nation.

But Dr Oginga said it was not up to Mr Gitari to tell him when to record the statement.

“This is a weekend and probably it can’t be done today. I will do it soon but it is not for (Gitari) to tell me when.

What does he know about the matter (assassination attempt)?” he asked.

Recently, Mr Gitari also came under attack from ODM leaders in Parliament when he enquired on the whereabouts of the former PM, who has been in the US, delivering lectures at Boston University and other forums under a programme for former heads of state.

The MP had sought to know whether the ODM leader had retired from politics. He also sought a statement from the Leader of Majority Aden Duale to explain under what circumstances Mr Odinga qualified to go to the institution yet he is not a former head of state.

However ODM MPs questioned the quality of some statements being cleared to be brought before the floor of the House and wondered why Kirinyaga Central MP was interested in Mr Odinga’s private life.

And yesterday, three TNA MPs said such an allegation was serious and asked the government to beef up security for the former PM.

Speaking at Sega Girls High School in Ugenya constituency during a fund raising, the MPs said Mr Odinga’s presence in politics added a lot of flavour.

“We (TNA MPs) love Raila’s unique ways. Politics would not be interesting without him because he makes politics lively,” said Mrs Ng’ang’a.

The MPs were reacting to allegations made by Dr Oburu Odinga who said that there are some Presidents from the EAC are planning to assassinate Raila upon his arrival from USA.

Dr Oginga on Friday last week claimed without naming names that “some of the Presidents of the EAC countries have a personal agenda in the region which they fear can’t be achieved with the ODM leader around”.

He said the plan was to assassinate the former PM on his return from the US trip.

But his claim was quickly dismissed by State House spokesman Manoah Esipisu, who called it “cheap, unfounded and demeaning to the integrity and the agenda of EAC leaders” who met last week at Safari Park Hotel, Nairobi.

Inspector-General of Police David Kimaiyo said he had not received any reports on the alleged plot.

Dr Oginga’s claims made it the second time in two years that an ODM MP has raised allegations about a plot to assassinate the former PM who is expected back in the country at the end of the month.

In 2012, Gem MP Jakoyo Midiwo claimed some senior officials in government at the time had planned to kill the former prime minister, allegations that were denied by the government.