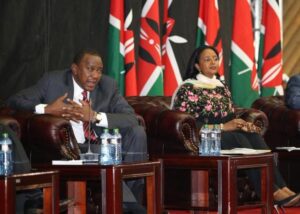 Foreign Affairs and International Trade Cabinet Secretary Ambassador Amina Mohamed says the UAE government officials will be in the country to assess the skills they are interested in starting this Thursday, after which recruitment for skilled and semi-skilled roles will be conducted in three weeks time.

Ambassador Mohamed has attributed the offer for jobs by the UAE government to a trip by President Uhuru Kenyatta last year, in which he negotiated for export of labour.

The CS was speaking at the launch of the Kenyan Foreign Policy and Kenya Diaspora Policy which becomes the first ever published Kenyan policy guideline of foreign and international relations.

President Uhuru Kenyatta who presided over the launch of the documents has hailed the new arrangement as one intended at improving the country’s bilateral and multi-lateral relations focused on mutual benefit especially economically.