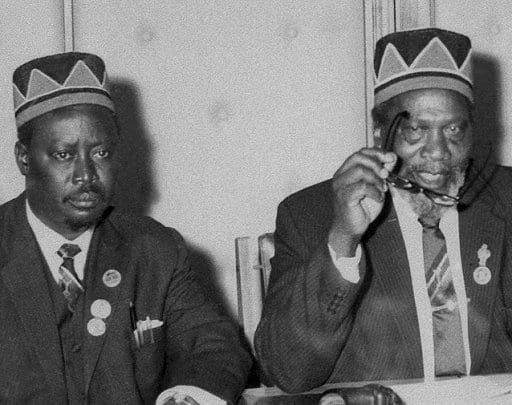 In 1914, the first Kenyan Prime Minister, first President and the founder of the nation was baptised (in Anglican Church, perhaps) with the Christian name John Peter which he changed to Johnson Kamau Ngengi. In 1938, he changed from Johnstone to Jomo. Jomo stands for burning spear while Kenyatta is derived from beard belt which he was fond of wearing. Many Kenyans do not know his Christian name because he never used it till his death in 1978.

The most interesting episode of politicians renouncing Christian names is the father to Raila Amolo Odinga. Jaramogi Oginga Odinga was a baptised Christian with the name Obadiah Adonijah. He was Jaramogi Ajuma Oginga Odinga untill his death in 1994. He was the first vice President and one of the leading founding fathers in the Kenyan history. His dislike of saint name is manifest in his famous book, “Not Yet Uhuru”. His two sons Oburu and Raila were to be baptized by a white Missionary, but Oginga Odinga persisted on African names.

The successor of Jomo Kenyatta, Toroitich Arap Moi, highlighted his Christian name Daniel immediately he took over the office. His Christian faith was almost identical to his presidency. He was like Daniel of the Bible. He had respect for Her Majesty the Queen of England. All his sons are baptised and use Christian names.

His successor, Mwai Kibaki is also a Catholic Christian, with the Christian name, Emilio. He is a staunch Christian. His wife Lucy is known as Lucy Kibaki, a true Christian tradition. His presence in the Church is conspicuous.

Instead, his successor, Uhuru Muigai Kenyatta, is a baptised Catholic Christian. He attended Catholic schools. But his Christian name is still unknown and he does not use it.
The late Saitoti, a long serving vice President during President Moi’s era, was known as George, a Christian name that he never hid from the public. The Deputy President William Samoi Ruto maintains his Christian name. He is William, even if his proper Church is not explicitly spoken of as George Saitoti, who was a Catholic. Moi is known to be of African Inland Church.

The late Tom Mboya was known as Joseph Thomas Mboya. His Christian identity was also visible in his political life more than Jomo Kenyatta. He was not ashamed to be identified as Tom in public. But there is no proper mention of John Peter or Johnstone in the case of Jomo throughout his public life as a leader.

Raila Amollo Odinga, the second and the last Prime Minister in the Kenyan history is known to be a legio maria, the sect his father followed, but he has also been re-baptised by different pastors including Prophet Dr. Owuor. However, his Christian name is not known till today. If he has any, nobody can tell.

Professor Anyang’ Nyong’o is a Christian by the name Peter. In politics, Peter is not used but Anyang’ Nyong’o. Christian name is played down in his public work.
My question is, why do Kenyan powerful political elites fear their Christian identity? Why is the name a problem for many Kenyan leaders? The answer to this question is varied and cannot be tackled in this blog. What is revealed is that the majority of those who excel in the Kenyan politics tend to hide their Christian identity as opposed to their Muslim conterparts.

There is more than meets the eyes in this way of playing politics in Kenya. The Africanization plays some role in this while, there is also, an element of anti-imperialism. Severally, such leaders who tend to hide their Christian identities are opposed to colonialism and its consequences. Most of them play the politics of decolonization of the African culture. Most of them are not objected to polygamy and other African traditions.

President Uhuru Muigai Kenyatta took his mother’s creed. His uncle, George Muhoho, a former Catholic priest, is a staunch Catholic Christian, wth the mother of the President, Mama Ngina. She was known as Ngina Muhoho, the daughter of Chief Muhoho. She became a staunch Catholic but her Christian name is not known in her public life. (Read our blog on sainthood to understand why some leaders hide their Christian faith).

Impunity,Shame:Arrest Orengo and we expose you, Cord dares Jubilee