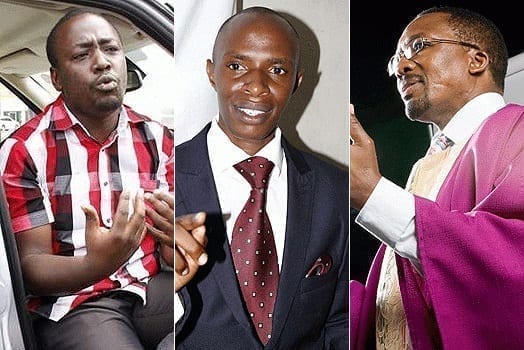 The shocking happenings in some of churches in the past few years have torn Kenyan Christians apart on the authenticity of miracle healings.

Who can forget the case of Kenyan-born Bishop Gilbert Deya, who claimed to have a supernatural ability to make infertile women pregnant?

Bishop Deya’s case only got stranger when a UK-Kenyan investigation concluded that he and his wife were stealing Kenyan babies and smuggling them to Britain.

The Kenyan police alleged that the Deya Ministry was a baby-snatching ring and in 2006, called for his extradition by the UK, which is, unfortunately, where he still remains.

Bishop Deya moved to the UK in the 1990s and started several churches.

Bishop Thomas Wahome of Helicopter of Christ Church in Kenya

Thomas Wahome of Helicopter of Christ Church, began charging members of his congregation about Sh1,000 shillings to tell them if their names are written in the Book of Life.

In Christianity, the Book of Life is where God records the name of all who are destined for heaven.

Bishop Wahome, whose followers had branded him a prophet, believed he had been granted special access to the pages of God’s book.

His followers had reportedly been turning to him to check on their heavenly status.

He routinely told his flock to send the money and then come back the following day to know if their names are in the Book of Life.

This wasn’t the first of such schemes by Bishop Wahome on his followers. He had previously told his followers that they could be healed of their diseases and ailments by just touching his clothes.

However, each congregant had to pay Sh1, 200 to get the chance of touching his clothes.

Pastor Micheal Njoroge of Fire Gospel Ministries was exposed by the media after Esther Mwende, a sex worker, came out publicly to claim that he had been paying her and other women to give false testimonies in his church.

Esther Mwende claimed that she did not know that her customer was a ‘man of the collar’.

According to her, after the first intercourse, Pastor Njoroge told her that he was a ‘man of God’ and that he had a business proposal that would see her make quick money.

What followed soon after was a dramatic plan that could have seen Ms Mwende earn Sh200, 000 shillings. And what’s more, she would earn a bonus for recruiting other ladies in the business.

So the script was rehearsed, and come Sunday, behold Pastor Michael Njoroge healed Ms Esther Mwende who pretended to have a deformed mouth.

Evangelist Lucy Nduta, a self-proclaimed prophetess,  perpetuated a scam in which she convinced HIV/AIDS patients into purchasing prayers that would cure them of the deadly disease.

She promised her followers that she could heal HIV/AIDS  through prayers.

He is a self-styled modern-day prophet, a “miracle healer” who attracted thousands to his Nairobi “church” with claims of being able to cure everything from childlessness to HIV/AIDS.

Victor Kanyari, who ran the Salvation Healing Ministry, assembled a team of racketeers who rehearsed false testimonies and staged “healings” infront of the congregation.

In one of the most damning “miracles”, a former assistant revealed how Kanyari used potassium permanganate, which turns red when mixed with water, to convince his followers that his prayers washed away mysterious diseases.

His assistants also hid needles between their fingers, which they then dumped into foot baths to add to the illusion.

Coincidentally Victor Kanyari is the son of prophet Lucy Nduta.

An ex-convict at Shimo la Tewa Prison in Mombasa, Pastor Ng’ang’a is at the centre of  police investigation into the fatal road accident near Limuru that left one person dead.

Multiple eyewitness accounts claim the pastor was the driver of the car that caused the accident. The pastor has denied the claims.