Five people have been arrested for trailing Nairobi Senator Mike Sonko and his entourage for about five hours on Tuesday night.

A source told the Star the suspects followed the Senator’s convoy of three cars, which stopped several times, from Machakos to Nyali in Mombasa.

The suspects who were in a Porsche Cayenne (KCB 209H) and a Range Rover Vogue (KBJ 630V), also made stopovers, the source said. 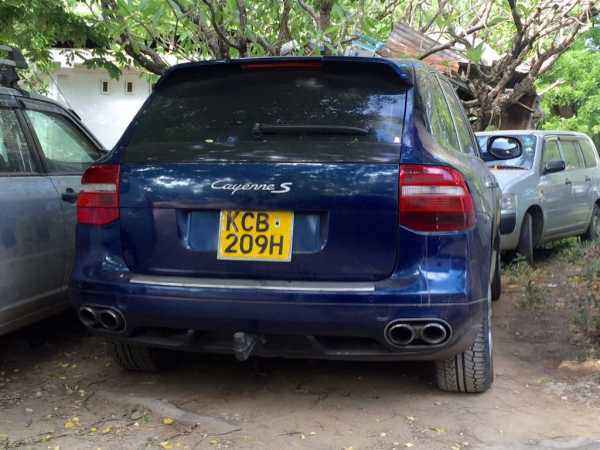 A member of Sonko’s security team said they shot in the air to scare the suspects away; they were identified as Benard Kirimi, Josiah Omutuko, Willy Omundo, Dennis Ondula and Mohammed Liban.

“We were monitoring them very closely. We later handed them to Nyali police station and recorded statements,” the officer said, following the incident behind Nakumatt Nyali.

The five are being questioned by detectives from the CID, the Criminal Intelligence Unit and the Anti-Terror Police Unit. Their mobile phones and other gadgets were confiscated for analysis.

The Range Rover that trailed Nairobi Senator Mike Sonko and his entourage for about five hours on Tuesday night, at Nyali police station in Mombasa. Photo/ELKANA JACOB

Sonko’s lawyer Cliff Ombeta said he was working with the police to ensure the culprits are punished.

“Several MPs have died this way. I cannot allow my client to be destabilised in any way. He is a public figure and has several enemies including politicians,” he said.

When reached for comment, the Senator said he has several enemies including politicians and landgrabbers. He gave mobile number 0722 886600 which he said his fans should call or send messages to when in trouble.

“Let police do their work. Several politicians including former MPs Mugabe Were (Embakasi), Tony Ndilinge (Kilome) and George Muchai (Kabete) lost their lives after being trailed,” he said in a phone interview.

“I have several enemies but I will help and work very closely with the poor people of Kenya.”