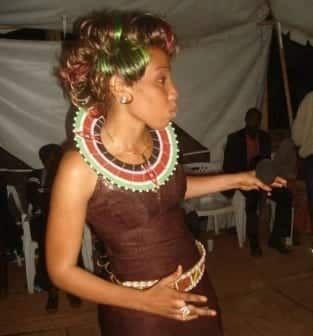 Family and friends of the slain Kalenjin songstress Diana Musila (pictured) are yet to come to terms with her death.

Fondly known as Chelele, her life came to an unexpected end on Saturday January 9. Her husband, Eric Musila, is a key suspect in the murder of the musician who has left behind identical twins.

But away from music, Chelele’s name made headlines in 2012 after her husband Eric Musila, an Administration Police officer, was charged with the murder of surveyor Eliud Yegon over an alleged love affair with Chelele. The case is still in court.

Her last album Kamang’unet which translates to ‘Hope,’ for the first time focuses on problems in life and she even asks God to help her.

Barely a week after her demise, an audio recording believed to be Chelele’s surfaced. The speaker is heard narrating how her ex-husband snatched everything from her, including property, money, land and kids.

The audio that has gone viral has somehow left many wondering if the dead musician had foreseen her death.

I have sung in for years but anything I got was snatched from me. We have a case in court and in fact, there is nothing I know about it. And there is nothing the guy that got killed knows. And he was very innocent. I never slept with him, he felt sorry for me for the things I have been through. He was told of my troubles and he felt like meeting and helping me.

Never allow your daughters to marry ‘enemies’. But as soon as we met and he helped me, he was killed, yet he was blameless. I did not know it would come to this, that he would kill me. He has tortured our children. Everyday, he holds a knife to me, saying he will kill me if I don’t sing and bring money.

My dear mother, I know you have suffered. I became nothing in your household. I did not help you in any way, but it’s not my fault. I was trying on my part to ensure I have a good life. I shared my pain with you, maybe you would have helped me but sadly it was not possible. I tried to look for the Governor, I felt that he would help me, but I did not find him.

Nandis, love each other with Kipsigis love. All of you should love one another so that you are able to defeat the enemy, because it is possible the enemy will come and kill our children,” the voice in the audio narrates.

Why I quit as witness after a year in Uganda