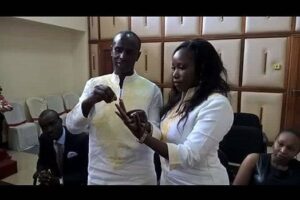 The civil wedding was held at the Attorney General’s office on Thursday and saw the 47-year-old Mr Sossion exchange marital vows with his new wife Vivianne Kenduiywa.

The ceremony was attended by close family and friends.

The wedding was a hushed affair, with pictures of the event escaping to the public through photos posted on social media.

The civil wedding was held at the Attorney General’s office. PHOTO | COURTESY

This is Mr Sossion’s second marriage after he lost his first wife in 2010 to a road accident.

He has three children from his first marriage.

In an earlier interview with Business Daily newspaper 2015, Mr Sossion offered that only God knew if he would ever remarry. God, it seems, answered his prayers.

The invitation card for the reception party to be held in Bomet. PHOTO | COURTESY

Officials from all Knut branches in the country, including bigwigs at the union’s headquarters, have been invited for the reception party.

The former teacher started his career as a teacher in 1993 at his alma mater, Tenuek High School, in Bomet.

“I’m a stickler for time keeping. If I have appointments, I honour them. If it’s time to be home, I’ll be home,” he told a daily paper in a recent interview.

Uhuru directs Lands ministry to issue titles to all schools

Excitement and anticipation as Kenyans in US wait for Miguna Miguna

Funeral and Memorial Service For Thomas Kimani Of Baltimore Maryland

God may empty you:Endure the squeeze, the hurt and the molding