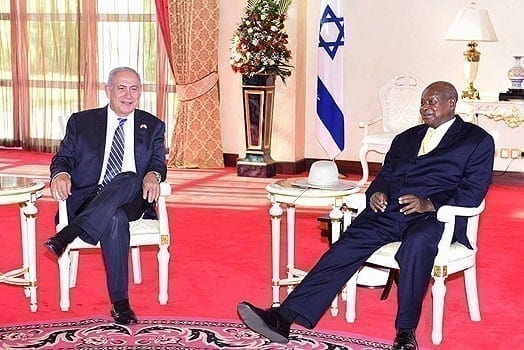 Israeli Prime Minister Benjamin netanyahu was expected in Kenya yesterday evening in a visit that coincided
with the legendary hostage rescue in Entebbe, Uganda. Forty years later the Entebbe operation still reads like a scene from a Hollywood movie. Indeed, movies have been shot and books written on the heroic exploits of the Israeli commandoes.

The raid was even taught at military colleges including the respected Sandhurst as a model special forces operation.
But the rescue plan could not have worked without Kenya’s help. The planes landed in Kenya for refuelling and
the injured were also treated here.

That the army and the General Service Unit were used to secure the airport clearly shows the Kenyan connection
in the whole operation.Operation Entebbe looked like a scene from a Hollywood Movie.

Under the cover of darkness, a plane carrying Israeli commandos escaped the enemy radar to land at the Entebbe Airport in Uganda.

The men in uniform had a delicate mission. The commandos were here to rescue their citizens who were being held hostage at Entebbe airport.

Without wasting time, they raced across the airport, burst into the terminal building that was holding 103 passengers and crew of an Air France plane, which had been hijacked a few days earlier.

Behold the Apocalypse: Jerusalem Becomes the Capital of…

“Get down. This is IDF (Israeli Defence Forces),” the commandos ordered.

The commandos mercilessly gunned down six of the ‘hijackers’ who attempted to stop them. The Entebbe raid had just began. It was the night of July 3, 1976.

The events that followed were later used to recreate various training manuals for the military in the world. The hijackers were from a group known as the Popular Front for the Liberation of Palestine.

It is believed that the hijackers had been granted permission to land the French plane in Entebbe by President Idi Amin.

They were determined to hold the hostages until their demands to have their compatriots released from jails in Israel and elsewhere were accepted.

Yonatan Netanyahu, who was leading the strike force had been shot in the encounter. But this did not derail their mission. It is not clear whether the three planes used in the mission were able to land and exit without runway lights.

This is not the only mystery surrounding the raid 40 years later. Yesterday, Yonatan’s brother Benjamin Netanyahu, now Israeli Prime Minister, visited Entebbe, making him the first prime minister of Israel to visit the region.

The commandos rescued the hostages, who were badly shaken at the time, whisked them to a cargo plane and flew them out of Uganda into safety.

But the rescue plan could not have worked without Kenya’s help. Though the country said it had not been informed that it was going to be part of the raid, it was in Kenya that the escort planes landed for refuelling. Those who were injured during the operation were also treated in Kenya.

The Standard, reported that the then Prime Minister, Yiztak Rabin, had decided to keep Kenya in the dark on security reasons as he “did not want to embarrass the authorities in that country who had troubles of their own with Idi Amin”.

This was not the only Kenyan connection to the raid. The hijackers also claimed that Kenya was among the five countries that were holding officials from the Palestinian Liberation Organisation.

A Ugandan radio had repeatedly reported that the hijackers holding the hostages wanted Kenya to hand over five of its men. Israel was to give up 40, West Germany was accused of holding six of their men while France and Switzerland were to give up one each.

Kenya at the time put up a spirited campaign to deny the allegations, given that if proven to be true, they would have made its relationship with Uganda worse.

At the time of the raid, the two neighbours were already involved in a series of border and diplomatic feuds that almost pushed them to war.

It is reported that President Amin was tempted to attack Kenya in retaliation but was unable since his fleet of fighter jets had also been destroyed in the raid which happened at a time when his army was also hurting from low morale. But what is not in question is that Kenya’s role in the raid hastened the collapse of the East African Community, a year later.

Kenya maintained that those allegations by Uganda had been made by Uganda out of ill will. In a bid to support its case, Kenya said it would welcome any impartial inquiry into the allegations.

But Kenya’s role could not be hidden for too long Amin came out publicly and accused Kenya of playing a major logistic role in the raid, warning it as in previous spats of “dire consequences”.

Witnesses at the time told journalists that they had seen three troop transport planes arrive at the Kenyan airport, even as the Kenyan government fought to minimise its role in the operation.

Some witnesses said they had seen an Israeli C131 military aircraft that morning at the Kenyan airport. The airport lounge was also reportedly turned into a makeshift field hospital, complete with an operating table, unaesthetic equipment, and oxygen tanks. It was also reported that the Kenyan army and the General Services Unit were used to secure the airport. It was not until two decades later that the extent of Kenya’s role in the operation was known.

William Kombe worked as an air traffic controller for the East African Community. Kombe said in an earlier interview published by The Standard that the Israeli commandos kept him guessing the whole night. There was high level planning between Kenya and Israeli authorities.

Kombe and one other colleague were in charge of all the 15 aircraft that were expected to land that night. But the Israeli aircraft was the most important assignment for the night.

The pilot of the Israeli aircraft did not get in touch with Kombe for instructions to land at the expected time. Kombe said he was forced to call him a few minutes to midnight. The pilot informed him that his plane a Boeing 707 was experiencing some ‘engine’ problems.

Kombe did his calculations and realised that it would take several minutes before he would be ready to land.
It was during this wait that he realised something unusual was happening. Shortly after, a strange aircraft that had not been scheduled to land called requesting to land. Its pilot identified his aircraft as an Israeli Hercules military coming in from Entebbe.

He said he had completed a mission and was requesting to land because he had casualties on board. As protocol demanded, Kombe knew this was beyond his pay grade and had to ask for permission from ‘senior state officials’ before he could allow the Israeli plane to land.

As soon as he was finished with the first Israeli pilot, a second one called in with similar request, the only different demand on top of the medical help was refuelling.

He had also barely finished with the second one when the third call came through. A confused Kombe knew he had to act fast. He first tried calling his boss, the director of Aerodromes for directions but his line was dead. He escalated the matter to the Foreign Affairs Ministry but also the phone did not go through. That is when he tried State House. Here he also found no response. He allowed the planes to land on ‘humanitarian’ grounds.

“I had to act on my own. As the controller in charge, I had the prerogative to deny or allow the aircraft permission to land,” he said.