MUSEVENI STOPS HIS MOTORCADE FOR A ROADSIDE PHONE CALL

Photos of Ugandan President Yoweri Museveni seated on the roadside while talking on phone have caused a stir on social media.

The photos were posted Tuesday morning showing President Museveni seated on a camping chair during the phone call, with his motorcade of over eight vehicles parked meters away.

Museveni made the rare spectacle while on his way back to State House, Kampala, after attending the World Population Day celebrations in Isingiro, western Uganda.

He stopped over at Kyeirumba village for the call that lasted 30 minutes and later greeted the locals who had mulled nearby.

Ugandan government spokesman Ofwono Opondo shared the images, reminiscent of Museveni’s days as guerrilla fighter, but gave no information on the person who was on the other end of the phone call. 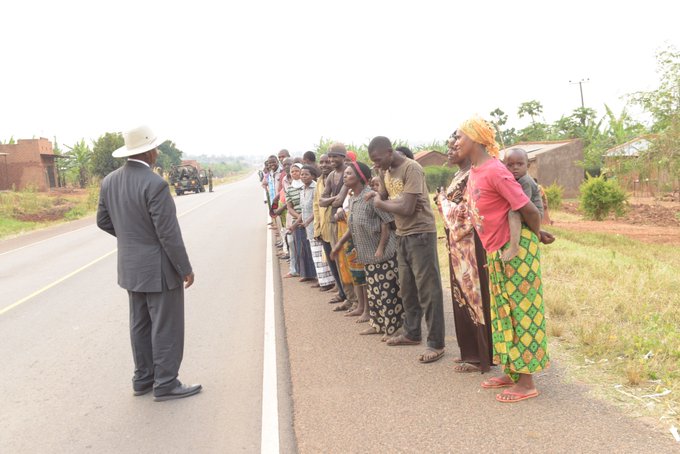 @KagutaMuseveni talks to curious residents who gathered. They want cheaper solar batteries, thanked him for road

The locals are seen thanking Museveni for the newly tarmacked 74 kilometer road that links Uganda to Tanzania through Kikagati in Isingiro district.

The President during his stopover even acknowledged motorists who passed by with a thumb-up while on phone. 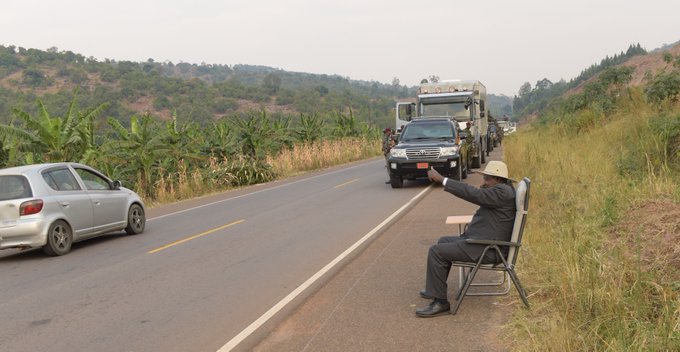 According to the Red Pepper, a gossip newspaper, the residents of the remote village urged the President to engage solar distributors with an aim of reducing  cost of batteries from the current Ush 300,000.