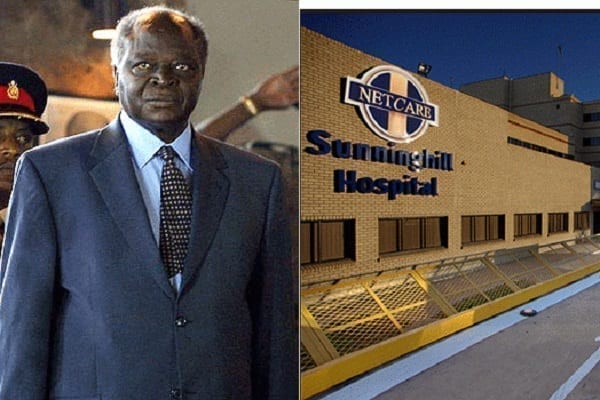 Former President Mwai Kibaki will spend at least one more week at a South African hospital.

He is set for a medical review on Monday.

This comes after he underwent a successful surgery to remove a clot in an artery in his neck.

Speaking to the Nation in confidence, a source privy to the former president’s health status said that he was recovering well and was even eating.

Mr Kibaki spent one week at the Netcare Sunninghill Hospital in Johannesburg, with only his family allowed to visit him.

“His family is renting a lodge opposite the hospital for easy access to the hospital,” said the source.

Mr Kibaki underwent surgery after doctors located the clot in good time while it was in a relatively safe part of his body.

He was flown out of Nairobi last weekend after falling ill while at his Muthaiga home on Saturday and was rushed to Karen Hospital.

The decision to fly him out was reached after doctors at the Karen Hospital determined that he needed specialised treatment.

Dr Harun Otieno, an interventional cardiologist at the Aga Khan University Hospital in Nairobi explained that although blood clots are the body’s natural mechanism to stop bleeding, it can be dangerous especially if the clot gets into organs such as the brain, heart and the lungs, leading to either heart attacks or strokes.