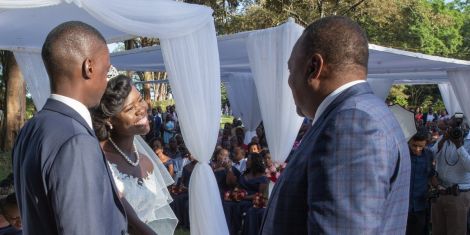 Kiraitu’s daughter, Makena Murungi, got married to James Bukusi in a colorful wedding ceremony that was attended by several dignitaries.

Addressing the guests, Uhuru stated that the future of Kenya as a nation was being molded by its youth who were rejecting the ways of the older generations.

He further heaped praise on young Kenyans who respect and tolerate those they study or work with without any influence of ethnic prejudices.

“We celebrate the coming together of our people. This generation is doing tremendous things because they do not see barriers amongst them. They see the person they went to school with and the person they work with. That is whom they respect. That is who they fall in love with and marry,” the President stated.

He encouraged the youth to be the foundation for a better future for the nation as he wished the newlyweds a happy and blessed union.

Deputy President Ruto in his speech celebrated the marriage of Makena to Bukusi, whose parents originate from Busia County, as a step in the right direction as it was helping to build bridges between Kenyan communities.

He further reiterated that every Kenyan must take deliberate steps to go beyond ethnic boundaries, faiths and political parties to create a more harmonious nation.

“The foundation of a nation is the family and we have come to celebrate your marriage,” the Deputy President declared.