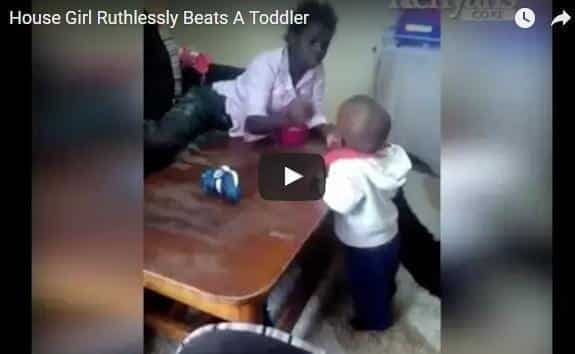 A video of a house help ruthlessly beating a defenceless child has gone viral on social media.

In the 7-minute recording, the young lady is seen in the sitting room landing heavy slaps on the boy identified asEthan while smacking his head severally.

The girl then goes to another room to get food for Ethan and in the process throws a slipper which lands on the toddler’s face.

When she settles down to feed the little boy, the heartless maid continues to hit the child every time he eats reluctantly.

Even worse, she repeatedly threatens to pull out the boy’s teeth using the metallic spoon she was using to feed him.

According to unverified reports, the parents of the child had suspected that he was undergoing mistreatment, hence, asked the neighbour’s house help to record what happens when they were not at home.

Though aware of the camera recording the events, the house help continues to torture the boy and even threatens to let him stay hungry.

Ethan’s case is one among many others of house helps who have been captured mistreating their employer’s children.