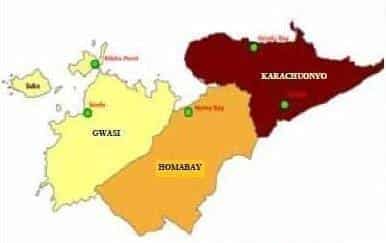 Judge Joseph Karanja, sitting in Homa Bay, on Tuesday found the the Independent Electoral and Boundaries Commission (IEBC) did not conduct a free and fair election.

The case had been filed by Mr Awiti’s challenger and independent candidate Oyugi Magwanga.

Mr Magwanga, who cited massive irregularities in the poll in the petition, provided enough evidence, accodring to Justice Karanja.

The court ordered IEBC to conduct a repeat election that meets the threshold set in the Constitution and election laws.

The former Kasipul MP said he had a parallel tallying centre whose results revealed that he garnered 224,863 votes against Awiti’s 174,235 votes.

The two fierce rivals had initially locked horns in Orange Democratic Movement primaries, with Mr Awiti carrying the day but Mr Magwanga rejected the results and, in a protest, decided to run an independent.

Mr Awiti becomes the second governor to lose his after Wajir’s Ahmed Mohammed Abdi Mahamud, whose election was nullified following a successful petition on January 12.

HOME OR AWAY, NATION BUIDLING IS EVERY CITIZEN’S AFFAIR