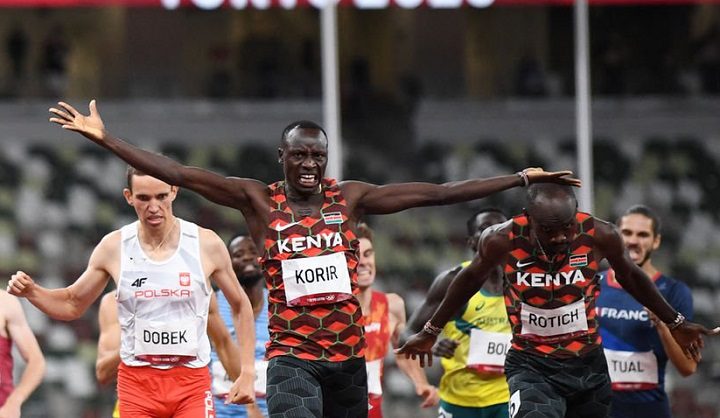 Emmanuel Korir won Kenya’s first gold medal in the Tokyo Olympics on Wednesday. Korir clocked 1:45.06 to win gold in the 800m final here at the Olympic Stadium with compatriot Ferguson Rotich coming in second for the silver to ensure Kenya get to keep the gold that the country has won in the last four editions of the Games.

Paul Ereng, who is Korir’s coach, started Kenya’s love affair with the gold in the Olympics in 1988, with William Tanui keeping the title in Barcelona in 1992 before Bungei reclaimed it in 2008 in Beijing.

Poland’s Patryk Dobek (1:45.39) took a surprise bronze, as Australia’s Peter Bol, who had taken the initiative in the early stages of the race, winding fourth outside the medals in 1:45.92.

Botswana’s Amos Nigel, the 2012 London Olympics silver medallist and the pre-race favourite owing to his world lead, finished a disappointing eighth place in 1:46.41.

Nigel was a late inclusion in the final after taking a hard fall in the semi-finals.

Uhuru: How My High School Sweetheart Margaret Became My Wife-VIDEO

Meet Lupita Nyong’o, Actress No One Knows, But Everyone Will Be Talking About