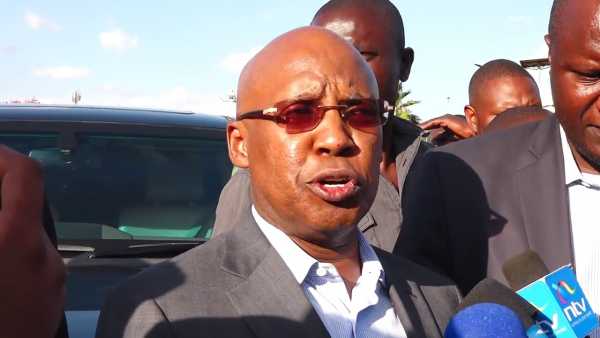 Businessman Jimmy Wanjigi has come out of hiding after police left his residence in the wee hours of Wednesday morning.

Wanjigi had locked himself up in what is believed to be a strongroom since Monday, October 16, when police raided his home in Muthaiga, Nairobi, in an operation that would last over 48 hours.

Addressing the media today morning at his Muthaiga home, Wanjigi termed the raid on his home as an “absolute persecution and an unjustified siege his family need not to have gone through.”

He maintained his innocence, adding that were it not for the presence of Raila Odinga at his Muthaiga home, the situation would have been worse.

“Were it not for Raila, I don’t know where my family would be right now,” Wanjigi said in the press address called by opposition leaders.

On the issue of guns being recovered in his home, Wanjigi said the firearms recovered at his Nairobi residence were all registered but denied having any knowledge or connection to the cache of weapons found at a Malindi house.

He claimed that during the police siege on his 44 Muthaiga Road house, the seurity officers assaulted his wife, Irene Nzisa Wanjigi, for recording on video breakages and destruction that were happening in their house.

“My wife here was assaulted by a police officer all in the name of her trying to record what they were doing in this house. That is a complete and absolute persecution. If it was not for the will, strength and prayers of Kenyans we would not be standing here today,” the businessman stated.

In an emotive statement, Wanjigi added: “They tried to break in this home which my children have grown up in. This is very very personal. They came here more than 100 people like I am the worst person in the land…GSU officers armed to the teeth and we are innocent Kenyans. If they can do that to some of us who live in these suburbs, it must be frightening what is happening to the common mwananchi.”

Earlier on, the tycoon was captured sharing a hearty moment with a number of individuals at his mansion, where police yesterday recovered seven guns and 600 rounds of ammunition