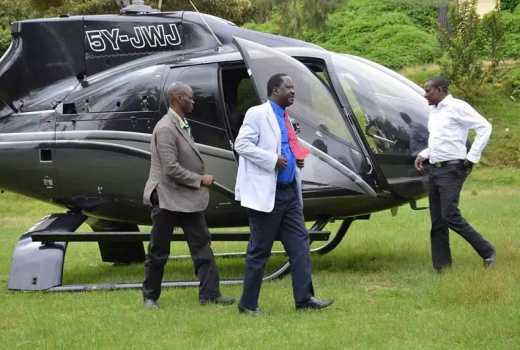 Opposition chief Raila Odinga made a grand entrance at the Afraha Stadium in Nakuru to watch the Mashemeji Derby pitting Kenya’s most successful clubs, Gor Mahia and AFC Leopards.

The former premier landed in the middle of the pitch at the half-time break after spending his morning in Nairobi attending the Labour Day celebrations at Uhuru Park.

Two choppers landed in the field with Raila aboard one of them. He was flanked by veteran footballer Joe Kadenge, Sportpesa CEO Ronald Karauri and Nairobi Senator Jonson Sakaja- a staunch Leopards supporter.

The ODM Party leader plunged the stadium into frenzy of cheers as the spectators from both sides marvelled at his presence at the game. Raila is a diehard supporter of Gor Mahia and seldom misses the Mashemeji Derby.

Uhuru’s Kin acquires stake In Sportpesa as speculations of…

Gor Mahia won the match on post penalties (5-4) and will now face English Championship club Hull City in an international friendly in Nairobi on Sunday May 13th.