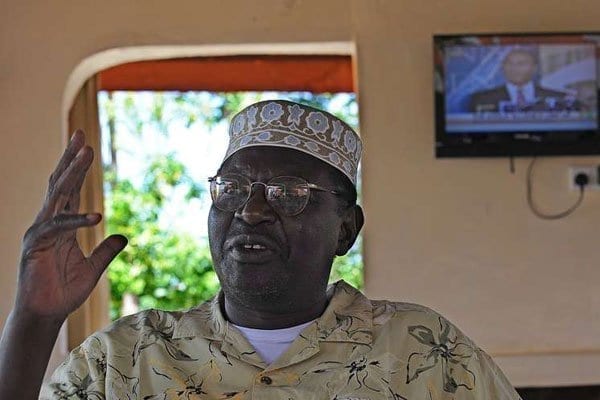 On any other day during the Fifa World Cup fiesta, K’Ogelo, a Siaya village in football-crazy western Kenya, would be abuzz with pundits, wagers, and the occasional tiffs between supporters of rival teams.

This is not the case this year as football competes for attention with of excitement surrounding the second coming of K’Ogelo’s most famous son, former United States President Barack Obama, on July 17.

That is except for one man, another Obama called Malik, who has found little worth of adoration in his step brother’s globally acclaimed achievements.

Indeed, he tends to take positions that are poles apart of his illustrious sibling’s, ranging from family to politics.

“I am not willing to grant an interview on that. I have no comment, thank you,” Mr Malik said when the Nation asked him about the preparations for the visit and whether he would welcome his younger brother.

The community in K’Ogelo, Siaya County, has been preparing to receive its son who put the village on the world map when he became Illinois senator and later president.

The ghosts of Mr Malik’s criticisms of his brother, coupled with his endorsement of current President Donald Trump when Mr Obama backed Ms Hillary Clinton in the 2016 elections, have resurfaced.

In 2016, Mr Malik brazenly accused Mr Obama of ignoring his Kenyan family and Africa after the latter was elected the first black president of the US “despite using his roots as a strong pillar of his 2008 campaigns”.

“President Obama is my brother and I love him, but he is a hypocrite. He wants nothing to do with Africa despite campaigning on a platform of helping to transform the continent,” Mr Malik said then.

In K’Ogelo, the community has drafted a memorandum it intends to present to Mr Obama for some of the projects initiated in his name and honour.
Select community members will meet on July 13 to discuss the contents of the memorandum.

Community spokesman Nicholas Rajula, who in 2009 led a delegation of K’Ogelo village to the US for Mr Obama’s inauguration as President, said one of the requests to Mr Obama will be to support the establishment of Barack Obama University in the area.

However, the Nation has learnt that Mr Malik has reached out to Prof Michael Muiga — the brainchild of the idea — requesting that the university be set up in Homa Bay County where the Obama family “Mr Malik, through an aide, reached out to me with the proposal but I insisted that the university must be built in K’Ogelo where the former president’s father is buried,” Prof Muiga said.

“Just as Jaramogi Oginga Odinga University was put up in Bondo in honour of Kenya’s first vice president, the Barack Obama University must be in K’Ogelo.”

Mr Malik refused to be drawn into the controversy when contacted by the Nation.

“Please leave me out of that. If I have anything to say, you will be the first to know,” he said.

On Monday, Mr Rajula the committee made up of Archbishops Habakuk Abongo, Zacheus Okoth and Professors James Kombo and Mwiga “is working around the clock to fine tune the pre-visit agenda and the programme for the day”.

“The community has provided a 24-acre piece for the construction of the university and an additional 100 acres for a research institution by the Centre for Disease Control,” Mr Rajula said.

He said Mama Sarah Obama’s Safeguard Orphans and Widows Organisation has also been incorporated in the programme.

“In the memorandum, we have requested that Senator Barack Obama secondary and primary schools change their names to President Barack Obama,” Mr Rajula said.

The centre will be the first in the region and is expected to host world class athletes.

Other facilities at the centre include a library, an ICT laboratory and a vocational centre.