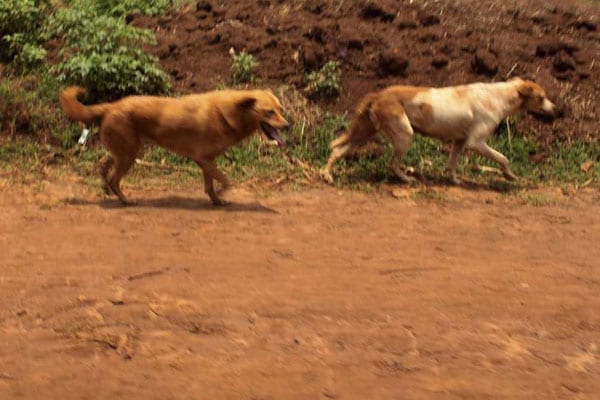 There used to be many dogs loitering around every neighborhood in Kenya. The poor animal is not recognized as important ‘wildlife’ and therefore cannot enjoy any protection under the United Nations’ endangered species. The number of cats has also decreased, but on that we have an idea where they have been going: Some character was making samosa and “cat dogs” and “cat burgers” out of them! The poor guy was arrested, when in fact he should have been commended for Kujipanga!

The speculation is that from the time China became a major contributor to the construction of our infrastructure, the number of dogs begun to decrease.

The disappearance of dogs has been compensated by the growth of human population. When Kenya became an independent republic in 1963, we were 10 million strong. In the last 50 years, we have managed to seriously reproduce to over 50 million. The American reproductive society theorizes that black people are more ‘fertile’ than white people (http://rockarch.org/publications/resrep/elman.pdf). The argument is that African cultural heritage dictates the fertility. United Nations sees this as a problem especially when, according to them, Africans don’t know how to Jipanga. Traditionally, Kenyans do not base their future on a planned program. With over 250,000 young people graduating from high school each year, Kenyan colleges and trade schools absorbs only about 50 thousand of them. The rest are the ones we see loitering around neighborhoods with no plans or hope!

Even the 20-30-vision nonsense fails to have any solution for the millions of young people wondering around aimlessly in Kenya’s neighborhoods. Given that the vision is another Neo-colonial idea adopted by ‘myopic’ Africans to sound like the western masters, its purpose and goals are withdrawn from the real problems facing Kenya. Also, having grown up in ‘Kinangop’ with a dream of owning a Prado and eating at the Intercontinental hotel in Nairobi, the politicians have no idea that an under ground ‘lava’ is cooking and sooner than latter it will explode and flow into the secure neighborhoods of Muthaiga, Rudha estates and in Eldorets’ highland estates.

The Jubilee government has no intention of solving the problem. You cannot solve the problem by concentrating on rewarding the few who helped make you president, deputy president, MP, Senator, and MCA. At least Deputy president William Ruto is honest enough to present his agenda in a humorous way. Speaking a few years ago to the Luyha community, he said that the sole reason why he is following president Uhuru Kenyatta with humility was to ‘Kujipanga’. He argued that retired president Daniel Arap Moi jipangered behind president Uhuru’s father until, according to Ruto, “Akawa Kitu”. Such honesty has to be commended to the detriment of any plan to advance the warfare of the millions of youth loitering around urban and rural Kenya.

That is why the guy selling cat samosa has to be commended for a plan: A plan to make a living in a country that has nothing to offer the next generation. The Jomo Kenyatta era laid out a blue print of eradicating disease, illiteracy, and poverty. With this plan, his administration established schools and brilliantly joined with churches to supplement government efforts. It also started companies like KCC, KMC, KFA and many others, including the National Youth Service to guarantee that those who graduated from the schools had jobs and was not underground lava waiting like a volcano to explode! The SGR was supposed to employ, but it ended up giving most of the jobs to the Chinese youth: Why do you think Kenya Airways flies often to China . . . not to ferry Kenyan youth! The few hundred jobs given to the Kenyan youth is but peanuts!

Sitting in an apartment in Nyayo Estate, Nairobi, a young girl was staying with her auntie after going through the National Youth Service. President Uhuru Kenyatta revived the NYS to rekindle the Old Mzee Kenyattas’ glory. I asked her how the training went and she was excited about having gone through the program. Then I asked her, “What are you going to do with the training?” She responded with the same innocence that Kenyan youth display, “I have been out of NYS for the last year and was hopping my auntie will find me a job.”

I felt sorry for her as the government indicated its’ desire to add another 20,000 more trainees to the NYS! They will join the long line of millions loitering with nothing to do! Then one day some politician will discover them and direct their frustration skills to some ‘dark promise”.  Even with these skills, we cannot make our own yundos we have to import them from China?

At least someone is benefiting from the Chinese invasion! ‘Hot Dog’, anybody?