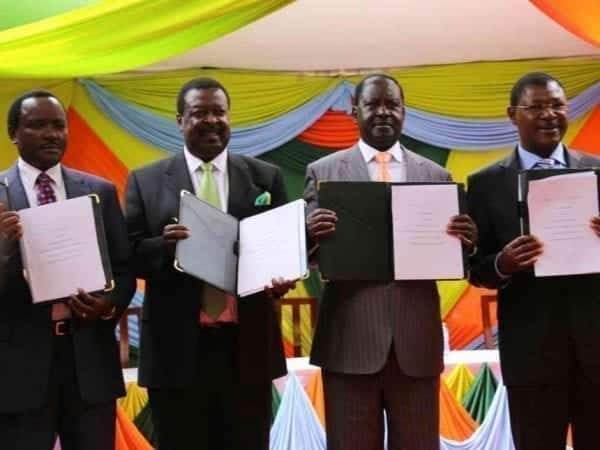 The opposition’s NASA coalition is dead, Ford Kenya leader Moses Wetang’ula reiterated on Tuesday night, adding he is no longer a part of it.

Wetang’ula noted that the process of leaving the coalition requires going through party organs with a clear understanding of political dynamics.

But he added: “I repeat here that my political journey with [Raila] Odinga is over. I am not in NASA with body and heart. I am only forced and bound by the law. NASA died on January 30 and was buried, thus I don’t hold any NASA positions in Parliament.”

Kenyans have January 30 etched in their minds as it is the day when Raila had himself sworn-in as the People’s President. Deported lawyer Miguna Miguna administered the oath at Uhuru Park in Nairobi.

The outfit had four members, the others being ANC’s Musalia Mudavadi and Kalonzo Musyoka of Wiper.

The four came together to form a unit strong enough to counter President Uhuru Kenyatta and DP William Ruto’s Jubilee Party but plans changed after losses in the August and October 2017 presidential elections.

Raila, who is ODM boss, held ‘secret’ meetings with Uhuru and on March 9 announced that they had joined forces. His coalition partners felt betrayed, with Wetang’ula saying his divorce from NASA, after his loss of the Minority Leader seat, would be “noisy and messy”.

Wetang’ula, who is also Bungoma Senator, acknowledged that the force was a great idea birthed by Mudavadi and embraced by partners in CORD because it captured the imaginations of Kenyans.

Unfortunately, he said, the conduct of the partners has been wanting since the 2017 general election.

He said the conduct watered down every effort to hold the coalition together.

“I repeat; NASA is now history .. it is a moribund … in ICU and inactive. All the coalition partners have been moving across the country chest-thumping on their agenda but only Ford-K and ANC seem to be holding things together with the possibility of merger,” he told Citizen anchor Hussein Mohamed during an interview.

He added: “Technically I am in NASA because I am in Parliament under the coalition’s umbrella. It should be noted that all the four parties under the coalition are not parliamentary parties. That’s why the shell of NASA remains relevant for this season.”

The Ford Kenya boss accused Raila and the President of wanting everything for themselves and trying to achieve their goals through state machinery manipulations.

“Kalonzo, Musalia and I are among those who called for dialogue to cool political temperatures after the disputed election. Raila, being our presidential candidate with Kalonzo as his running mate, could have had the courtesy to at least let us know of the handshake,” he said.

He maintained, however, that they did not have any problem with the handshake but that the process that led to it.

Wetang’ula has said before that NASA is dead. He also said he will not join Ruto, who is expected to succeed Uhuru in 2022, as he will strengthen his party ahead of that race to State House.

However, Mudavadi said that his co-principal will remain a bonafide member of NASA as the coalition agreement binds all member parties together.

He echoed remarks by ODM Secretary General Edwin Sifuna who told Wetang’ula that “coalitions are not dissolved at funerals and village barazas”.

Sifuna told the Senator to give up his party’s committee positions make his ‘divorce’ official.