Mau evictions renew Raila, Ruto rivalry as their allies face off ahead of 2022 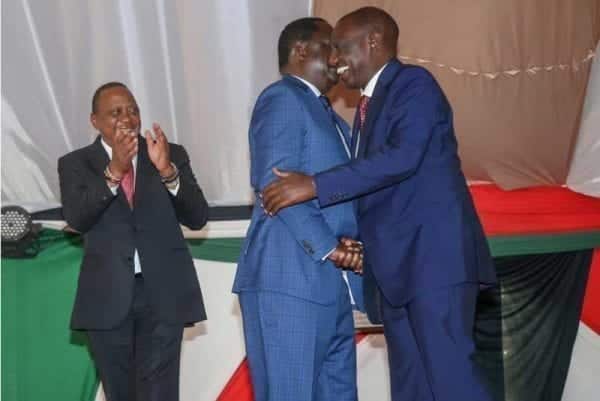 The 46,000-hectare Maasai Mau evictions have renewed the political rivalry between Deputy President William Ruto and Opposition leader Raila Odinga political rivalry as allies of the two clashed over the boundary between the forest and the settlement area.

The over 10 legislators drawn from the Rift Valley defended DP Ruto’s eviction of those who were living beyond the 2015 tea buffer zone created by the Jubilee administration but were opposed to the implementation of the Mau Task Force report, completed in 2008.

“We are dismayed over what is happening here. President Uhuru Kenyatta swore to protect the rights of all Kenyans and we fully support his move to create the cut line but we wonder why some people who have title deeds and living in the settlement area are being harassed,” said Senate Majority leader Kipchumba Murkomen.

The 2015 cut line where the Nyayo tea zone has planted purple tea in a 25km area creating a buffer zone was established two years after Jubilee administration took over power in a bid to resolve the perennial evictions but it seems the matter is still far from over.

Opposition leaders comprised mainly of Maasai leaders are opposed to the use of the tea zone cut line and instead are pushing for the use of the implementation of the 2008 report, saying the 2015 cut line was illegal.

A month ago, DP Ruto while addressing residents at Sogoo in Narok South ordered those who had encroached beyond the tea zone to move out adding that the ‘legal’ settlers inhabiting within the cut line will be issued with title deeds.

He also said the government had allocated Sh100Million to rebuild 15 schools that were demolished during the 2005 Olposimoru forest eviction s and announcement that now seems to haunt him.

The Mau Complex has been a political hot potato and in 2013 the matter was used against Raila in Rift Valley for allegedly orchestrating the eviction of the members of the Kipsigis community who ironically had supported him almost to man in the 2007 election.

It however remains to be seen whether the politics of the Mau this time, will also have an impact on Ruto’s 2022 presidential bid.

This even as Senator Kipchumba Murkomen accused former Prime Minister Raila Odinga for pushing for the use of the 2008 boundary which he spearheaded for more members of DP Ruto supporters to curtail his 2022 bid.

“The 2015 cut line was created by President Uhuru Kenyatta’s government. We know that there are some government officials working in cahoots with some people who recently joined us to ensure DP’s succession bid does not come true. We know your gimmicks,” said Murkomen.

The Elgeyo Marakwet Senator said as Rift Valley leader they support forest conservation ‘100 percent’ that is why they were asking those who had crossed the tea zone to move out.

VIDEO: Raila leaves the crowd at Narok Stadium in a frenzy as he waves goodbye

Raila Odinga has impeached the Constitution